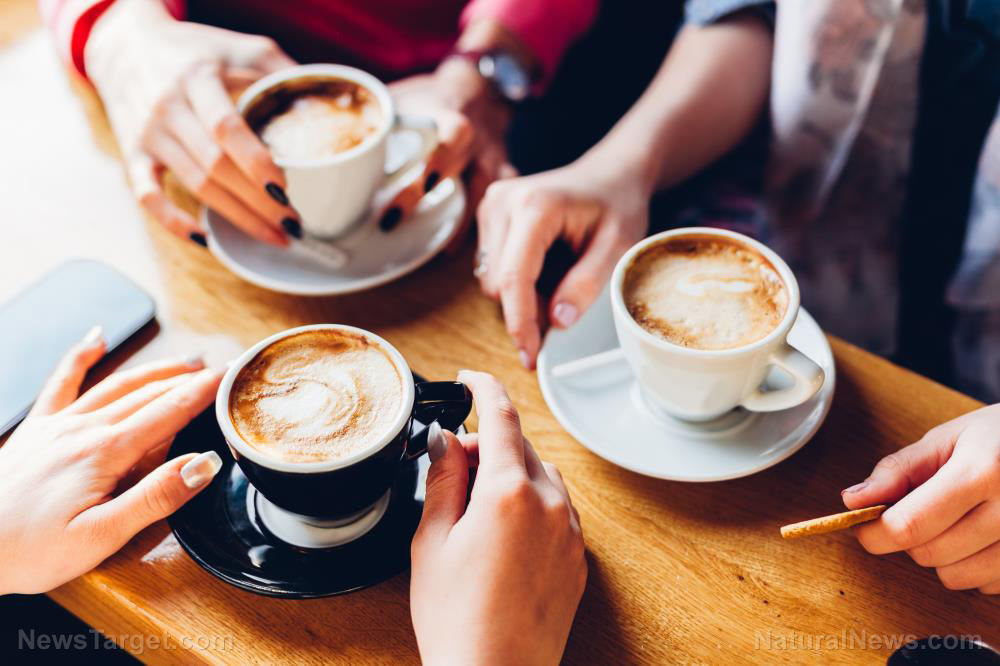 (Natural News)
Caffeine is the world’s most commonly used stimulant drug. It was previously only available in coffee, tea and soda, but now you can also get caffeine in unexpected products like energy drinks.

Despite the popularity of coffee, there are still many myths associated with it, such as it can dehydrate you. Read on to learn about coffee facts and myths before enjoying another cup of joe.

Here are five facts about the side effects of drinking too many caffeinated drinks like coffee, cola, tea or energy drinks.

Caffeine stimulates almost all the regions of the brain.

Whether that helps or hinders your ability to learn new information depends on an interaction with dopamine, another brain chemical. Rewarding behaviors induce your brain to release dopamine, the same process that is at work when someone develops an addiction.

When you dislike the information you are trying to learn, your brain doesn’t produce as much dopamine while caffeine simply interferes with your ability to focus on the task at hand.

But when you like the information you are trying to learn, your brain produces more dopamine and caffeine heightens your brain’s ability to focus on what you’re doing. (Related: What’s the best and healthiest way to brew coffee? Experts weigh in.)

Caffeine enhances your sensibilities but dulls your senses

Neurologists have discovered that while caffeine enhances the retention of verbal and factual memories, it also interferes with the brain’s ability to record feelings and perceptions. This means you may be able to articulate an explanation of your experience better when you have had some coffee, but you will have a harder time trying to remember how you feel.

In large doses, caffeine stimulates the A1 receptors more than it stimulates A2A receptors, so the net effect is relaxation and a feeling of security.

While having a cup of coffee is a great way to start your day, you should also monitor your intake because the excessive consumption of caffeine can make you hallucinate. In most cases, this effect kicks in after the seventh or eighth cup of coffee in a single day or the second or third energy drink in one hour.

You may hallucinate when you consume more than 300 mg of caffeine before the liver can detoxify. You may then see, hear, smell, feel, or even taste things that are not there.

This side effect of caffeine is linked to the release of the stress hormone cortisol, and is at its worst during times of emotional, but not physical, stress.

You might have regretted some choices you made while drunk on alcohol, but did you know that consuming caffeine may have similar effects?

The thrill of drinking alcohol or taking physical risks releases dopamine in the brain. Caffeine enhances your brain’s ability to respond to dopamine, which can then trigger risky and potentially addictive behaviors.

Surprisingly, caffeine also makes it easier to get a thrill even under normal behavior.

A lot of the things everyone “knows” about coffee aren’t always true. Here are five of the most modern misconceptions about caffeinated beverages.

While caffeine helps you stay awake, it doesn’t help you stay mentally awake and attentive. Consuming too much caffeine reduces your ability to engage in purposeful behaviors or focused behaviors even while it lets you continue to perform “brainless” tasks, like packing boxes.

If you’re sleepy and very tired, don’t drink coffee so you can drive home. This increases your risk of being involved in an accident.

You may feel like something’s missing without a morning cup of joe, but you’re not addicted to caffeine.

According to the American Psychiatric Association, caffeine addiction in the DSM-IV involves displaying three of the following seven characteristics:

Under the stricter DSM-IV definition, only about 0.6 percent of the U.S. population (about 2million) is actually addicted to coffee.

Red Bull is an effective “pick-me-up”

Red Bull is the world’s most popular energy drink and it is full of caffeine, sugar and a brain-active amino acid called L-taurine. No matter how much Red Bull you drink, it won’t necessarily pick you up, at least not very long.

Caffeine stimulates short-term activity. It increases your reflexes and brings you out of lethargy.

However, caffeine doesn’t help with long-term activity and it doesn’t give you endurance either.

It’s not important how you get your caffeine, as long as you get it

Identical twins have identical genes. According to studies of identical twins in Australia, there are strong, potentially genetic differences between coffee drinkers and tea drinkers.

If you get your buzz from drinking coffee, you probably don’t like tea, and vice versa.

Coffee and tea contain many chemicals besides caffeine, and the way the liver processes them in part determines how much caffeine the organ allows to stay in circulation and how long.

Caffeinated beverages can cause dehydration

Caffeinated beverages don’t cause dehydration and they don’t stimulate urination, unless you drink more than 600 to 700 mg of caffeine per day or seven cups of coffee, a dozen cups of tea, four or more tumblers of iced tea or two energy drinks.

As long as caffeinated beverages are not consumed in excess, they can also help you stay hydrated.

And while drinking caffeinated coffee will cause a slight increase in urine excretion, it won’t make you lose more fluid than you’re getting from the coffee itself. However, you won’t be getting the same fluid benefit cup-for-cup as you would from water, so make sure you drink more water than coffee.

Drink coffee and other caffeinated beverages in moderation to enjoy health benefits, like improved focus, and avoid any adverse effects.

Watch the video below to know more about the benefits and side effects of caffeine.

This video is from the Holistic Herbalist channel on Brighteon.com.

Which coffee is best for boosting your workout?

Fermented green coffee has potent anticancer effects thanks to chlorogenic acid and surfactin.