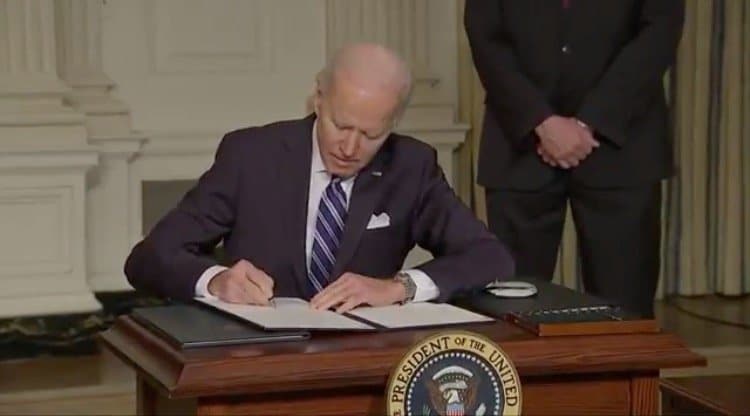 Several state attorneys general wrote a letter to Joe Biden slamming him for signing a record number of executive orders in his first week in office.

Biden is unilaterally legislating and has completely ignored Congress – the Democrats control both the House and Senate yet Joe Biden is moving full speed ahead issuing executive fiats.

Attorneys general of Texas, Mississippi, West Virginia, Arkansas, Montana and Indiana, signed a letter to Joe Biden reminding him that a US president has “limited power.”

The top lawyers of each state argued “State Attorneys General in particular serve as an important check and balance as the President carries out his constitutional charges.”

“Under the Constitution, the principal political control of our government is entrusted not to the President, but to the carefully constructed Congress which serves as both sail and anchor of the federal ship of state,” they wrote. “Congress writes the laws and the President and his officers are limited under the Constitution to the role of faithfully carrying them out.”

“But a president is not a Prime Minister or a King and must respect that his constitutional office is a limited Chief Executive, not the supreme authority of the state,” they wrote, adding that “overreaching and defying Congress will not be rewarded or succeed.”

“The President is obliged by oath to obey the laws enacted by Congress. Statutory roadblocks and constraints are not mere opportunities for creative lawyering or administrative gamesmanship.”

“Since Biden has gotten into office, he’s been acting largely unilaterally. I mean we saw record breaking number of executive orders, he has not yet met with lawmakers on Capitol Hill – we are not even quite sure who he’s talking to on Capitol Hill…does the White House believe this is the best way to make policy…?” the reporter asked.

Psaki totally evaded the question and gave a non-answer which is to be expected from an administration that seized power through vote fraud.