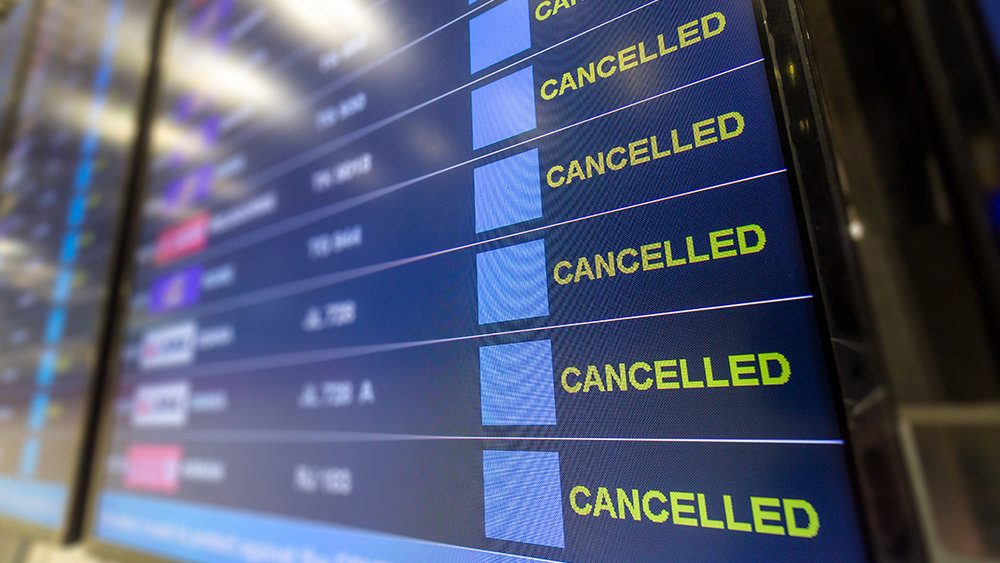 (Natural News)
American Airlines canceled more than 500 flights across a span of just four days as they deal with serious operational issues put in motion by the coronavirus pandemic. They’ve also been forced to reduce their July schedule by 1 percent.

According to data from One Mile at A Time, the airline canceled 83 flights on Friday, June 18. This was followed by 123 flights on Saturday, June 19, and a further 188 and 136 flights on the 20th and 21st respectively, for a four-day total of 530 canceled flights. The following two days saw an additional 81 and 25 flights being canceled. Experts believe further cancellations could be in the cards as the domino effect of the current flight cancellations starts to take hold.

Meanwhile, frustrated travelers are reporting long lines at American Airlines customer service counters in airports and waits of several hours to speak to agents on the phone.

In addition, American Airlines has proactively canceled around 1 percent of their flights for next month in hopes of avoiding last-minute cancellations and customer disappointment. The cancellations are said to be strategic, targeting markets where they will impact the smallest number of customers possible, such as those in areas where there are multiple alternative flights for customers to take with different airlines.

A spokesperson for the airline characterized the cancellations as the result of weather and labor shortages, saying: “The first few weeks of June have brought unprecedented weather to our largest hubs, heavily impacting our operation, and causing delays, canceled flights and disruptions to crew member schedules and our customers’ plans. That, combined with the labor shortages some of our vendors are contending with and the incredibly quick ramp up of customer demand, has led us to build in additional resilience and certainty to our operation by adjusting a fraction of our scheduled flying through mid-July.”

However, One Mile at A Time points out that most of the cancellations list “flight crew unavailable” as being the reason behind not flying. Most of these involve the Boeing 737 fleet, suggesting the issues with crew have more to do with pilots, who need to be rated for each specific type of aircraft that they fly.

There is some speculation that the airline is seeing delays in getting its pilots certified on the Boeing 737 as the number of these planes recently rose significantly when the airline put its 737 MAX fleet back in service. Pilots must undergo training on the specific controls and other aspects of this aircraft before they will be allowed to fly it.

According to the Financial Times, the carrier’s pilots’ union, The Allied Pilots Association, had previously warned the airline they did not have sufficient pilots to carry out their ambitious summer flight schedule. Representing 15,000 American Airlines pilots, the group warned the airline that it was currently understaffed due to a combination of earlier furloughs, voluntary leave and early retirements instituted during the pandemic. The airline furloughed 1,600 pilots during a lull in obtaining funds from the Payroll Support Program, and this made it harder for pilots to return to active status because the FAA requires them to undergo fresh training before they can fly.

Despite the warnings that they could come up short-staffed if a weather event occurred, American Airlines has been the most aggressive of the nation’s biggest carriers when it comes to resuming flights this summer. They are also reportedly short-staffed in other aspects, including gate agents and rampers, just as travel starts to inch back toward pre-pandemic levels.