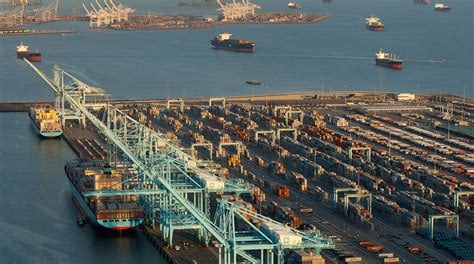 Joe Biden announced the ports in LA and Long Beach would start working 24/7 last week in order to relieve the bottleneck of container ships sitting offshore in the area.  Unexpectedly, no one listened as the ports were ‘ghost towns’ over the weekend.

With global supply chain bottlenecks threatening the Christmas shopping season, President Joe Biden highlighted his administration’s work with ports on Wednesday as he tries to stave off the potentially politically explosive headaches Americans may face as delays threaten holiday gift-giving.

The president met with the leaders of the two busiest ports in the United States — Los Angeles and Long Beach, both in California — and the International Longshore and Warehouse Union, and announced that the port of Los Angeles, would begin 24/7 operations in order to help alleviate bottlenecks. The Port of Long Beach started operating around the clock a few weeks ago.

Apparently, either Biden lied or no one listened as the ports were reportedly ghost towns over the weekend.

Despite President Joe Biden’s goal to move cargo around the clock in Los Angeles ports, the gates remained shut on Sunday with a smattering of open traffic on Saturday.

The nationwide port schedule app Pier Trucker showed terminals that looked like ghost towns Sunday with barren traffic lanes as additional cargo ships continue to pile up along the coastlines of Los Angeles and Orange counties. On Friday, 88 ships were waiting to dock at either Long Beach or Los Angeles harbors — 10 additional ships from the last count on Oct. 13, according to the Marine Exchange of Southern California.

So much for Joe Biden being a leader and beacon of change.  No one listens to the guy.