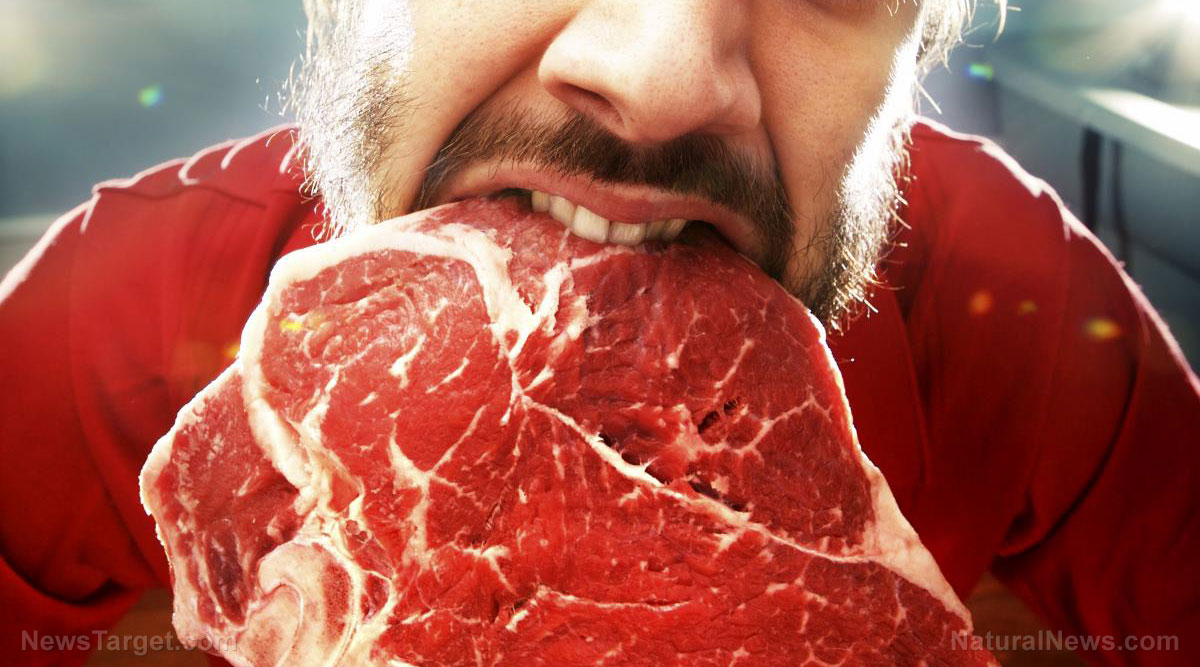 (Natural News)
How can all the problems of factory farming be solved in one fell swoop? Just kill off most of the humans and there won’t be a need for breeding and feeding billions of cows, chickens, turkeys and pigs for slaughter. That’s the “bloody secret” among the eugenicists who are funding the genetically modified “cultured” lab-grown meat made from fetal bovine serum, like the freaky scientists use in vaccines.

The cover story for this so-called revolutionary Franken-meat is, of course, climate change. Always blame the weather for anything that causes cancer and dementia. Even Hollywood’s top stars are pushing the peons of America to eat lots of Franken-meat, including Leonardo DiCaprio, Ashton Kutcher and Robert Downey, Jr. (who wouldn’t eat it themselves if their life depended on it).

No, there is NO science showing this lab-concocted cell meat is safe to consume – not on a short term or long term basis. And no, climate change has not even been proven to be a fact, so eating fewer animals won’t be staving off the melting of icebergs at the poles. The lab-meat-pimping-shills of Hollywood are always “all in” for anything that causes bad health, including lab-meat and clot shots.

Next they’ll try to ban all automobile use on Sundays to save the world from climate change. Wait a second, they already are. We already know that most food that comes out of laboratories causes cancer, like GMOs, processed junk-science “food stuff” (think Beyond Meat here), Roundup Ready “crop” seeds, corn, sugar beets, canola (genetically modified rapeseed) and the list goes on.

Test tube meat? Animal abortion blood is used to make Franken-meat for all the clot-shot victims to eat

Attention all semi-humans who have been repeatedly injected with FBS (fetal bovine serum) used to re-engineer your tissues (recombinant), you are now being instructed by the richest globalist eugenicists to eat lab-meat made from that same fetus blood extracted after the mother’s slaughter.

This TEST TUBE MEAT will supposedly save planet earth from getting so hot that the beaches disappear and we’re all living on boats, according to mainstream media, Bill “End of Times” Gates and Jeff “Bozo” Bezos.

Not sure if your lab meat came from the blood of a cow, chicken, turkey or pig? Just fry up that genetically mutated meat in some canola oil (rapeseed) and lather it up with some FBS special sauce (bloody fetal bovine serum laced with artificial hormones), then slap it between two buns, and off you go. “Would you care to super-size those cancer tumors, sir and ma’am?”

It’s not “slaughter-free meat” if the people who eat it are being slaughtered, now is it? This new lab-concocted nightmare is extremely expensive. And how can it be marketed as “slaughter-free” when a slaughterhouse byproduct is what they’re using to grow the stuff? Synthetic meat “biologists” aren’t saving the planet, they’re ruining it.

Buy organic meat if you must eat meat, and just cut back a little on your consumption habits. If you want to save the planet, don’t give another dime to the “climate change” scam artists and the billionaires who push Franken-meat and clot shot vaccines.

Bookmark Censored.news for more updates about toxic food and medicine that causes cancer and dementia, but carry no warning labels, and are never exposed in mainstream media as such.