Brazilian President Jair Bolsonaro Launches Candidacy for Re-election: More Important than Our Life is Our Freedom 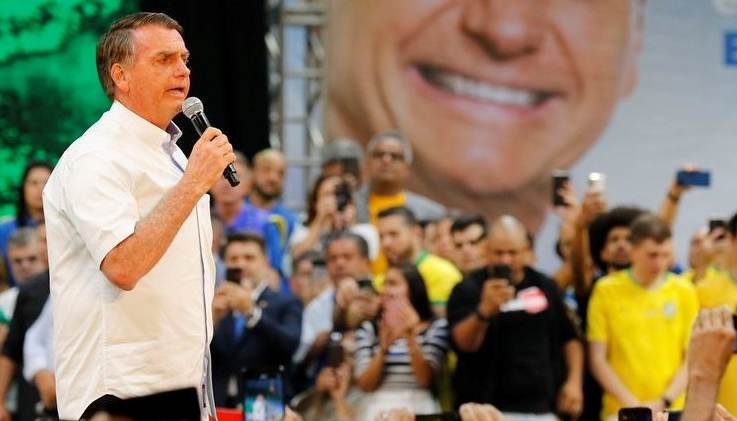 RIO DE JANEIRO – Brazilian President Jair Bolsonaro launched his candidacy for re-election at a major event in the state of Rio de Janeiro. The Brazilian leader defended God, freedom, and homeland in front of an audience of more than 12,000 people.

Bolsonaro is the favorite candidate of conservatives in Brazil.

TRENDING: BREAKING: President Trump Announces He Will Sue CNN for “Repeated Defamatory Statements” Which Have “Defamed Me and Defrauded the Public Regarding the Overwhelming Evidence of Fraud Throughout the 2020 Election”

In his speech, he pointed out actions of his government, such as construction works, reduction of corruption, privatization of public companies, autonomy of ministers to perform tasks, and the financial assistance granted to Brazilians during the covid-19 pandemic.

Bolsonaro also defended agribusiness, the country’s technological advance, and criticized the quarantines adopted by state governors during the pandemic.

The president emphasized that he has never ordered a nationwide lockdown or ordered any commercial establishment to close – and criticized state administrators who have restricted citizens’ freedom to work, study, or go to religious temples.

The First Lady of Brazil, Michelle Bolsonaro, was the first to speak at the event. She defended God and her husband’s administration.

“This nation is rich, it’s prosperous. It has only been mismanaged (in the past). God loves this nation,” she said.

Speaking to the audience, President Jair Bolsonaro defended freedom and compared it to the Cuban dictatorship, where the people cannot express themselves against the government.

“When you talk about people power, does anyone think that Cuban citizens don’t want freedom? They want it, but they don’t have it. How to get to that point? By wrong choices. Our mission is not to get in the way of your lives. It’s, more and more, to get the state off your backs. Strong state, weak people. Strong people, strong state,” said the president, who was applauded by the audience.

Bolsonaro also called on the population to go to the streets next September 7th – the date in which Brazil will celebrate 200 years of its independence.

The President’s idea is to protest against the Supreme Court justices, who have often adopted political stances and issued decisions unfavorable to Bolsonaro’s administration.

“I call on all of you now for everyone on September 7 to take to the streets for the last time. Let’s take to the streets for the last time! These few deaf black-clad (Supreme Court justices) must understand what the voice of the people is. They must understand that it is the Executive Branch and the Legislative Branch that make the law. Everyone must play according to the Constitution. We don’t want Brazil dominated by another power, and we have a few other powers keeping an eye on Brazil. What do we want? Peace, tranquility, respect for the Constitution, respect for the laws, and interdependence among the Powers,” said Bolsonaro to loud applause from his supporters.

In his administration, Bolsonaro has fulfilled one of his biggest government promises: facilitating access to weapons by civilians.

The Brazilian President repealed laws that prevented citizens from being able to buy firearms, especially through the hunters, shooters and collectors groups – known as “CACs” in the Portuguese acronym.

During Jair Bolsonaro’s administration, the number of individuals who own guns increased by 474%.

Jair Bolsonaro is a strong advocate of civilian arming. According to him, only a gun brings the guarantee that there will be no dictatorship in the country.

“I am not afraid of the armed people. All dictatorships preceded disarmament movements. An armed people will never be enslaved. Nobody disarms the American people. There is no use in showing up in the USA someone with the spirit of a dictator because it will not work. Brazil needs to create this spirit as well”, he said in a ceremony at the seat of government recently.

Lula was president for 8 years (2003-2010) and left office marked by strong corruption scandals. He was arrested for corruption and money laundering but was released on orders from the Brazilian Supreme Court.

The socialist candidate defends the legalization of abortion, media regulation, the end of public spending limits, gun control, and recently said he could end the war in Ukraine by offering beer to the president of Russia and Ukraine.

Polls say that Lula is the favorite to win Brazil’s elections, which will take place in November. But the public is suspicious of the veracity of the information conveyed by these surveys.