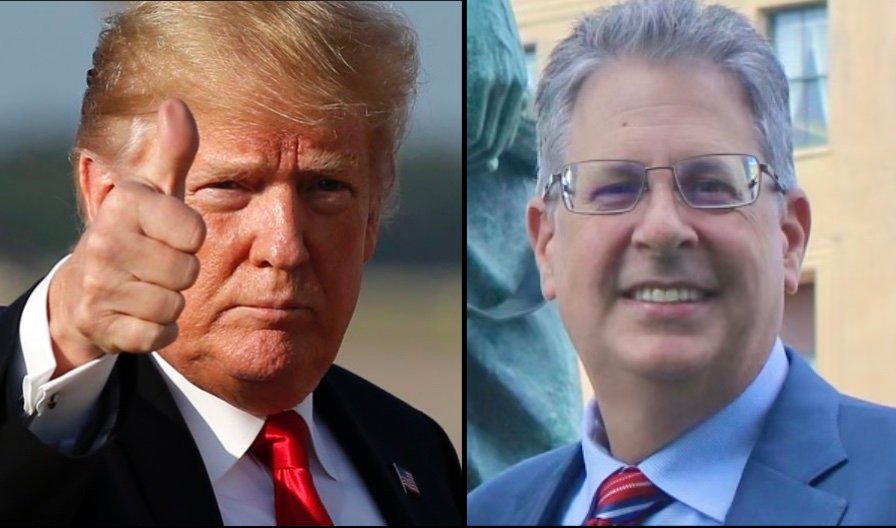 Constitutional Attorney, Matt DePerno is a devout Christian, a devoted husband and father, an American patriot, and a hero. Today, he got the highly coveted, well-deserved endorsement of America’s most powerful Republican, President Donald J. Trump:

Super Lawyer Matthew DePerno is running for Attorney General in the Great State of Michigan. He has defended the Constitution for 20 years and has been on the front lines pursuing fair and accurate elections, as he relentlessly fights to reveal the truth about the Nov. 3rd Presidential Election Scam.

Dana Nessel, the Radical Left, and the RINOs are targeting Matt because he gets results and has exposed so much Voter Fraud in Antrim County, and many more places, in the 2020 Election. He will never give up, and that’s why they absolutely cannot stand him!

Matt will properly enforce the laws for everyone—unlike what the out-of-control Radical Left Prosecutors are doing now. He will always defend our under siege Second Amendment, loves our Military and our Vets, and will restore Law and Order in the face of rampant and record-setting crime in Michigan. Matt DePerno has my Complete and Total Endorsement. He will never let you down!

100 Percent Fed Up reports – On July 15, Matt DePerno of DePerno Law announced that he was running for Michigan Attorney General. Running for a political office was not exactly the path DePerno expected he would be taking at this point in his career, but after watching the lawless and corrupt actions of Michigans Attorney General, Dana Nessel during excessive COVID lockdowns and in the aftermath of Michigan’s corrupt elections, DePerno felt compelled run for the state’s chief law enforcement officer.

DePerno has been married to his lovely wife Laura for 26 years. Laura is an RN with experience in multiple specialties, including general surgical, transplant, outpatient, oncology, trauma, critical care, and cardiology.

When he isn’t fighting to expose our corrupt elections, Matt DePerno turns to fly fishing in Michigan. He’s a devout Catholic who taught RCIA (Rite of Christian Initiation of Adults) classes for candidates interested in joining the Catholic faith for several years.

Most Americans know Matt DePerno for his brave pursuit of the truth in Antrim County, MI, where over 6,000 votes were flipped from President Trump to Joe Biden in the November 2020 general election. DePerno was hired by Antrim County resident Bill Bailey to get to the bottom of the stunning election results that showed Joe Biden the winner of a deep red county.

When courts around the nation were refusing to hear voter fraud cases related to the November 2020 election, the highly skilled Constitutional Attorney Mr. DePerno was granted access to perform a forensic examination of Dominion Voting machines in Antrim County, MI by Michigan 13th Circuit Court Judge Kevin A Elsenheimer.

In his lawsuit, Matthew DePerno claimed that based on the evidence they provided to the court, Dominion Voting Systems “committed material fraud or error in this election so that the outcome of the election was affected.”

At 5:30 PM on Friday, December 4, 13th Circuit Court Judge Kevin A. Elsenheimer granted permission to William Bailey and his team of IT experts to conduct a forensic study of the 16 Dominion voting machines, tabulators, thumb drives, related software, and the Clerk’s “master tabulator.”

Matthew DePerno quickly assembled a team of seven highly trained forensic IT experts who agreed to arrive the next day (Saturday) to conduct the forensic examination.

After 8 hours, the collection was complete. With 16 CF cards (similar to SIM cards), 16 thumb drives, and forensic images of the Dominion voting machines in hand, the IT team was escorted to the local Antrim County Airport by two Antrim County Sheriff vehicles, where they boarded their jet plane with evidence in hand.

DePerno waited patiently for the results of the forensic examination of the Dominion voting machines to arrive. While he was waiting for the results, Michigan’s radical Attorney General Dana Nessel who won her election after bragging she was the best candidate for the job because she didn’t have a penis, added Michigan’s far-left, dishonest Secretary of State Jocelyn Benson to the lawsuit as a defendant on Wednesday.

On December 14, 2020, during an emergency hearing, MI 13th Circuit Court Judge Kevin A Elsenheimer granted permission to Matthew Deperno to release the findings from their forensic examination on the Dominion Voting machines in Antrim County, MI where thousands of votes flipped from President Trump to Joe Biden on November 3, 2020.

After the forensic examination of 16 Dominion Voting machines in Antrim, Co., MI, Allied Security Operations Group has concluded that the Dominion Voting machines were assigned a 68.05% error rate. DePerno explained that when ballots are put through the machine, a whopping 68.05% error rate means that 68.05% of the ballots are sent for bulk adjudication, which means they collect the ballots in a folder. “The ballots are sent somewhere where people in another location can change the vote,” DePerno explained. The allowable election error rate established by the Federal Election Commission guidelines is 1 in 250,000 ballots or .0008%.

Based on the Allied Security Operations report, Constitutional Attorney Matthew DePerno states: “we conclude that The Dominion Voting System should not be used in Michigan. We further conclude that the results of Antrim County should not have been certified. Go HERE for the full story.

On May 18, 2021, after several months of back and forth in the courts, Judge Elsenheimer ruled the lawsuit asking for a non-partisan audit of Antrim County’s election results, doesn’t have legal grounds to go forward, and dismissed it.

According to Matt DePerno, his client, Bill Bailey’s case is far from over.

“The case of Bailey v Antrim County and Benson is currently at the court of appeals on the limited issue of whether Benson performed an “audit” as contemplated by the Michigan Constitution. We believe the decision by the trial court will be reversed and remanded back to the trial court for further proceedings,” he told 100 Percent Fed Up.

Unlike his opponent, Mr. DePerno respects the Constitution and believes in the rule of law. His opponent, the current Attorney General Dana Nessel is a thug who has weaponized her position as the state’s top law enforcement official multiple times since she took office in 2018, including the threatening of journalists who dared to tell the truth about the incredible election fraud that took place in Michigan.

“Our elected officials have a duty to serve the represented interests of the people by whom they were elected. That is the foundation of republic and what our Founding Fathers intended for America. This concept is lost on Attorney General Nessel, who has not upheld her duty and has breached the trust of the citizens of Michigan. She has not prosecuted corruption. Instead, she has enabled it, and worse, enabled corruption along her party lines. I have spent the better part of the past 26 years fighting for the rights of ALL citizens under the constitution, holding elected officials of government accountable when they do not act in the best interest of its represented citizens and violate the Constitution. The case of Bailey v Antrim County is about a citizen’s right under the Michigan Constitution to demand an audit of an election. Regardless of where one stands on the issue of election fraud in 2020, which I do believe took place, Michigander’s recognize the bigger issue that their rights as citizens are slowly being taken away. I stand to stop that from happening and have the track record to prove it. Michigander’s demand accountability, AG Nessel has not given that to the voters, I will.”

If you’d like to help Matt DePerno bring law and order back to Michigan and in the process, ensure that Michigan has free and fair elections, please consider making a donation to his campaign here: https://depernoformi.com