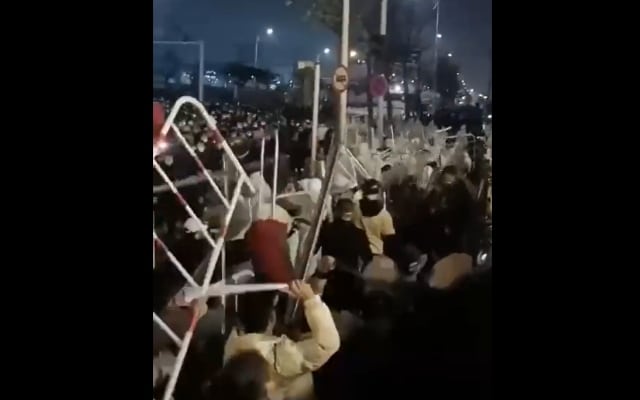 (Natural News)
It seems as though Chinese Communist officials have somewhat of a situation on their hands in the city of Zhengzhou, thanks to enduring COVID lockdowns and illnesses.

Several videos have been posted to various social media platforms showing crowds of workers at Foxconn’s largest iPhone factory rioting and clashing with police who are clad head-to-toe in protective suits. Reports claim that workers are revolting over conditions at the factory dorms, where they claim they are being forced to share dorm rooms with infected staffers, though there has been no confirmation and, of course, Chinese officials aren’t talking.

But the videos speak volumes:

Law Enforcement at the the Foxconn iPhone Plant in the Chinese City of Zhengzhou appear to have completely lost control of the situation. https://t.co/TqvJ9NzvpH

Protest against restrictions turns very violent at the world’s largest iPhone factory in China. Workers are using fire extinguishers to push back police ? ? ?

Meanwhile the riot at the iPhone plant continues?

“They changed the contract so that we could not get the subsidy as they had promised. They quarantine us but don’t provide food,” one Foxconn worker said during his live stream, according to the Strange Sounds website. “If they do not address our needs, we will keep fighting.”

“Those workers who are protesting are wanting to get a subsidy and return home,” said another employee who claimed that Foxconn changed workers’ contracts after the fact.

iPhone factory workers use barriers to push towards the police and destroy surveillance cameras (China)? ? ?

Another newly recruited employee told the BBC he visited the protest scene on Wednesday where he saw “one man with blood over his head lying on the ground.”

“I didn’t know the exact reason why people are protesting but they are mixing us new workers with old workers who were [Covid] positive,” he told the BBC.

Foxconn is a Taiwanese firm and is Apple’s main subcontractor for iPhones. In fact, the Zhengzhou plant assembles more iPhones than anywhere else in the world.

On Thursday, the company released a statement saying a “technical error occurred during the onboarding process,” adding that pay for new recruits was “the same as agreed [in the] official recruitment posters.”

The Taiwanese giant said its executives were in constant communication with the employees affected by the pay mix-up and bonuses and that all is being done “to actively solve the concerns and reasonable demands of employees,” said a report by the BBC.

Meanwhile, the International Monetary Fund (IMF) has called on Beijing to recalibrate the country’s zero-Covid strategy after Chinese economic growth has slowed significantly.

The world’s second-largest economy saw its gross domestic product (GDP) fall by 2.6 percent in the second quarter of this year, compared to the first quarter, which ran from January 1 to March 31.

“Although the zero-Covid strategy has become nimbler over time, the combination of more contagious Covid variants and persistent gaps in vaccinations have led to the need for more frequent lockdowns, weighing on consumption and private investment, including in housing,” the IMF said.

Despite the IMF’s urging, some analysts said it wouldn’t do any good, that China would not budge.

“Given that China is unlikely to be going to the IMF for help, it doesn’t really matter whether they pay attention to this statement or not,” Simon Baptist, global chief economist of The Economist Intelligence Unit, told the BBC.