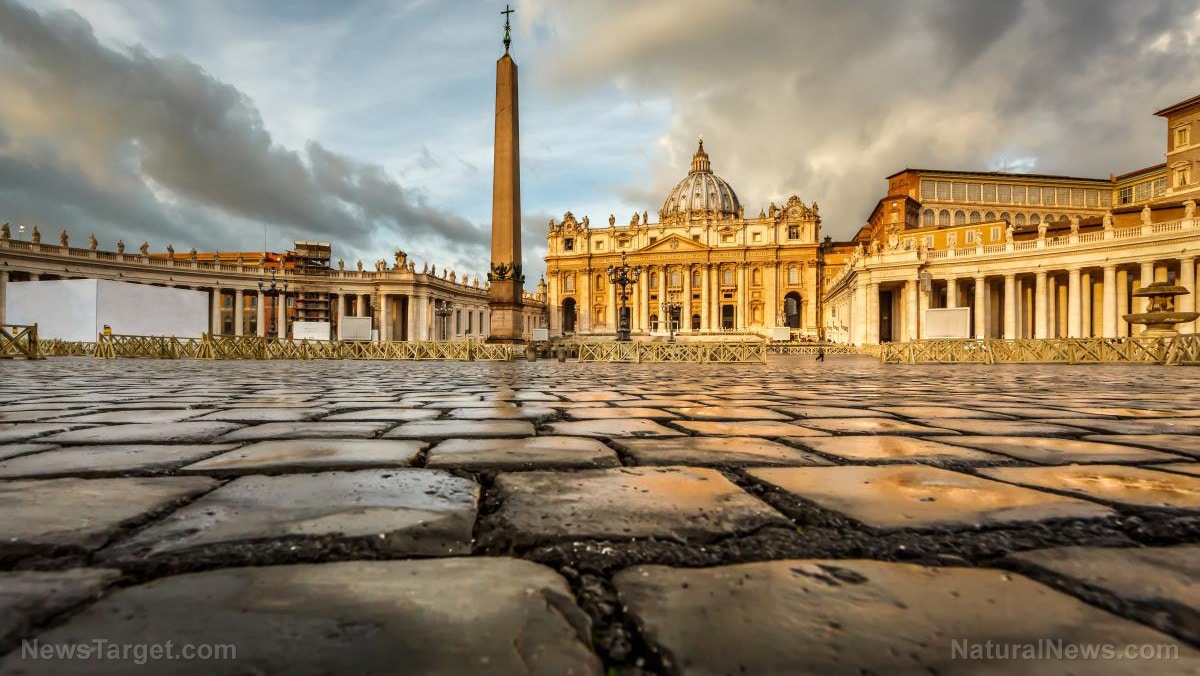 (Natural News)
Pope Francis has ordered the Holy See to transfer all of its financial assets into the Institute for Works of Religion, commonly known as the Vatican Bank, by Oct. 1.

Ben Armstrong, commenting on this news on his program “The Ben Armstrong Show,” noted that the pope’s order to get all of the Vatican’s financial holdings pooled together is a sign that an economic collapse is fast approaching. (Related: HOLY MONEY GRAB: Pope Francis imposes deadline for Holy See entities to deposit their assets with the Vatican Bank.)

“Folks, when the pope brings all the money in, it means he doesn’t want to lose the money that they have because he thinks something is about to happen – and why wouldn’t he?” said Armstrong. “The pope is buds with a lot of these globalists. He’s locked in tight with them, he’s friends with them. He knows exactly what the behind-the-scenes people are saying.”

In a document known as “rescriptum” or re-writing issued on Aug. 30, Pope Francis ordered the Holy See’s financial and liquid assets that are held in other banks to be moved to the Vatican Bank within 30 days of Sept. 1.

The pope’s rescriptum also served as a legal document with “the nature of an authentic interpretation” of certain provisions in the constitution of the Roman Curia, the central and leading administrative body of the Holy See, which gives the pope the authority to do this.

The rescriptum makes clear that all investments by all departments would have to go through the Vatican Bank under new rules. It also strips these departments of their ability to invest their funds independently of the bank. This rule has no exceptions.

This ability to make investments without the approval of higher authorities is what led to the Vatican’s former Cardinal Secretary of State making a direct investment into a building in London which is currently at the center of a corruption trial. The botched deal resulted in a loss of over 140 million euros ($138.8 million) for the Vatican.

Before last month’s rescriptum, the Secretariat of State, the office the secretary oversees, was known to own accounts in Swiss financial institutions, including Credit Suisse. Due to the new rules, all assets in these accounts would have to be in the Vatican Bank by Oct. 1.

Officially, this move is the latest action in the pope’s decade-long financial reform agenda. His allies within the Holy See’s financial institutions have spent the past decade cleaning up the Vatican’s books and trying to rid itself of its reputation as an offshore tax haven.

The Vatican Bank’s profits have been falling since 2020 as the pope continues his reform agenda by slimming down the number of clients the bank deals with. The bank currently only has 14,047 clients, down from 14,519 in 2021. The pope wants the Vatican Bank to keep slimming down its client list until it only serves Vatican offices, employees, embassies and Catholic religious orders, congregations and other organizations.

Learn more about the coming economic collapse at Collapse.news.

Watch this episode of “The Ben Armstrong Show” as Ben Armstrong talks about the pope pooling together all of the Vatican’s assets.

This is from the channel The New American on Brighteon.com.

Why does Pope Francis condemn capitalism but not communism?