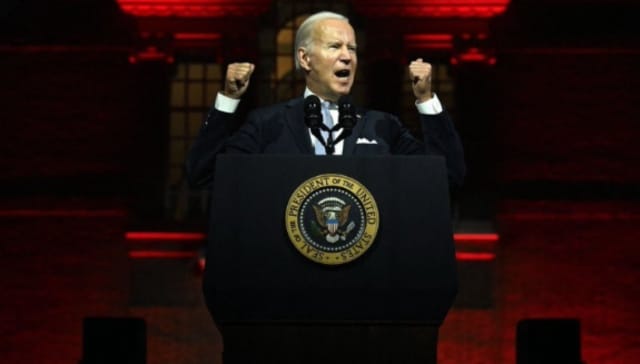 (Natural News)
Joe Biden’s handlers ensured he used another primetime address to the nation to trash his political opponents as “MAGA Republicans” who are a threat to the core tenets of our democracy, when in fact, his Democratic Party is the entity tearing down our institutions.

“In our bones, we know that democracy is at risk,” Biden said at one point in his speech after blaming Republicans for the break-in at House Speaker Nancy Pelosi’s residence in San Francisco, during which her husband, Paul Pelosi, was attacked by an illegal immigrant.

“All of this happened after the assault, and it just — it’s hard to even say; it’s hard to even say — after the assailant entered the home asking, ‘Where’s Nancy?  Where’s Nancy?’ Those were the very same words used by the mob when they stormed the United States Capitol on January the 6th when they broke windows, kicked in the doors, brutally attacked law enforcement, roamed the corridors hunting for officials, and erected gallows to hang the former Vice President, Mike Pence,” Biden went on.

“It was an enraged mob that had been whipped up into a frenzy by a President repeating over and over again the Big Lie that the election of 2020 had been stolen,” he said, falsely claiming that former President Donald Trump’s stolen election claims are wrong (the documentary “2,000 Mules” provides all the evidence proving the election was stolen).

“It’s a lie that fueled the dangerous rise in political violence and voter intimidation over the past two years,” said Biden, himself actually lying again.

“In this moment, we have to confront those lies with the truth. The very future of our nation depends on it. My fellow Americans, we’re facing a defining moment, an inflection point. And we must — with one overwhelming, unified voice — speak as a country and say there is no place — no place — for voter intimidation or political violence in America, whether it’s directed at Democrats or Republicans. No place, period. No place ever,” he said.

“This violence against Democrats, Republicans and nonpartisan officials just doing their jobs are the consequence of lies told for power and profit,” Biden claimed. “Lies of conspiracy and malice. Lies repeated over and over that generate a cycle of anger, hate, vitriol, and even violence.”

Biden also went on to claim that the “overwhelming majority of Americans believe our democracy is at risk, that our democracy is under threat” because “the defeated former President of the United States refused to accept the results of the 2020 election.”

“The extreme MAGA element of the Republican Party, which is a minority [of] that party as I said earlier, but is its driving force, is trying to succeed where they failed in 2020, to suppress the right of voters and subvert the electoral system itself,” Biden said, without evidence. “That means denying your right to vote and deciding whether your vote even counts.”

“Instead of waiting until the election is over, they’re starting well before it,” Biden claimed. “They’re starting now. They’ve emboldened violence and intimidation of voters and Election Officials. It’s estimated that there are more than 300 election deniers on the ballot all across America this year. We can’t ignore the impact this is having on our country. It’s damaging, it’s corrosive, and it’s destructive. And I want to be very clear, this is not about me. It’s about all of us.”

He also said that Americans should not expect to know the results of our elections on election night, which is literally admitting that races are going to be stolen.