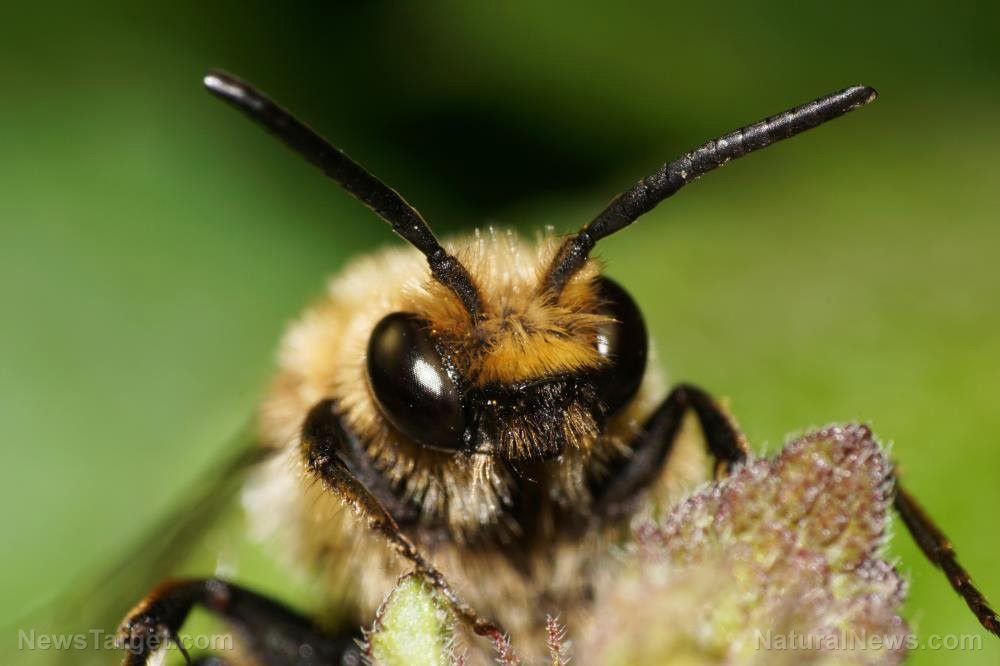 (Natural News)
A recent study showed that pesticides can harm bee populations for generations. The paper, published in the Proceedings of the National Academy of Sciences of the United States of America, found that bee populations can take a hit for generations once a bee is exposed to a common pesticide in its first year of life.

Lead author and University of California in Davis ecology Ph.D. candidate Clara Stuligross said: “Especially in agricultural areas, pesticides are often used multiple times a year and multiple years in a row. So this really shows us what that can actually mean for bee populations.”

Stuligross and her team studied a specific bee species called the blue orchard bee, which is about the size of a honeybee but lives alone and has a blue, metallic color. Blue orchard bees are important pollinators for native U.S. wildflowers and crops like apples, cherries, almonds and peaches.

The team carried out their experiment for two years and exposed the bees to imidacloprid, which is the most commonly used neonicotinoid in the United States.

Neonicotinoids are known to be harmful to bees because they affect their nerve cells and prevent them from transmitting electrical signals. The study specifically focuses on how exposure can continue to impact bee populations for generations, also called the “carryover effect.”

“It’s a systemic pesticide present in all of the plant tissues and it affects the nervous system of the bees. So it can have lots of different types of effects on bee behavior and bee physiology,” Stuligross said.

In factoring the probability and rate of nesting, as well as the female to male ratios of bees, overall exposure into sequential years saw a reduced population growth by 71 percent.

Thus, the team concluded that neonicotinoids are harming bee and insect populations, which have taken a dive in recent decades.

“These findings support what many of us beekeepers and solitary beekeepers suspect is happening in agricultural fields. We are seeing massive declines in all kinds of insects over the past several decades and much of it may be due to pesticide residues in the environment,” said researcher and beekeeper Steve Peterson, who was not involved with the research.

“I hope that the EPA [Environmental Protection Agency] will review studies like this and carefully consider these kinds of effects in their risk assessment. I do think that multigenerational and non-direct contact studies need to be required as part of the risk assessment for pesticides.”

Since the 1990s, a quarter of bee species have no longer been sighted, and insects have seen their populations fall by around 25 percent in the last 30 years. Pesticides are considered a major threat to insect populations, along with stressors such as habitat loss, pollution and climate crisis.

This latest research offers yet another argument for U.S. regulators to follow the European Union and ban neonicotinoids in their pesticide formulations. In the U.S., there are over 400 products that contain imidacloprid, and they all have adverse effects on bees. (Related: Pesticide cocktails found to be more dangerous to bees than expected.)

“The effects are cumulative. One need not be a genius to figure out that it might take only a small number of sequential years of pesticide applications to bring populations to dangerously low levels,” said Lars Chittka, an ecology professor at Queen Mary University of London, who was not involved in the study.

“This new study shows that even if pesticide application was banned for the 2022 season, we would still see the adverse effects from 2021 applications. The larvae that mature today and prepare to pollinate next year’s crops are already irreversibly affected.”

Stuligross and her team noted that reducing exposure to insecticides as much as possible is key, as is incorporating carry-over effects of pesticides into research.

The team noted that integrating risks to pollinators into pest management strategies remains important as scientists understand more about how pesticides accumulate in the environment and affect bee populations over multiple years.

Read more stories related to pesticides and bees at Bees.news