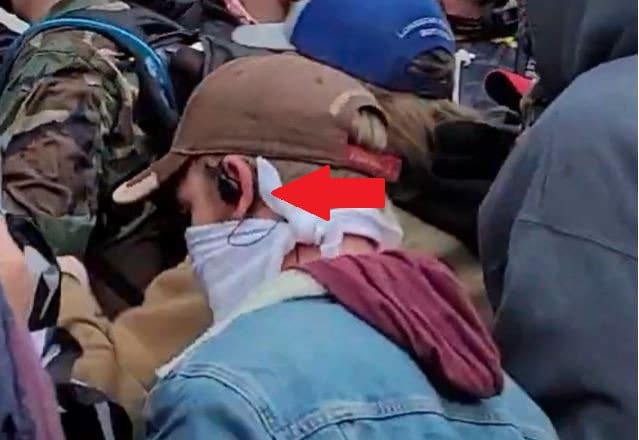 Micajah Jackson is a US Marine war veteran who recently served time in an Arizona halfway house after he was arrested and convicted of walking inside the US Capitol on January 6, 2021.

He was flagged in, committed no violence, and when he was asked to leave he left.

Marine veteran Micajah Jackson was sentenced to 90 days in a halfway house, 3 years probation, and $500 and $1000 fines.

** You can donate to Micajah Jackson’s Persecution Fund here.

Micajah peacefully walked inside the US Capitol which is a crime if you are a Trump supporter but not if you are a Democrat Party supporter.

Robinson was at the Jan 6 protests. He was the ONLY known protester that day out of a million Trump supporters filmed with a gun.

Phillip Robinson was put on the FBI most wanted list  as #343 after the protest.

The Daily Beast was proud to discover his identity – Luke Robinson

The FBI later removed Luke from their most-wanted list for some reason.

Luke Robinson was one of three operatives taken off of the FBI most wanted list from January 6, along with Ray Epps and Megan Paradise.

According to J6 defendant, Micajah Jackson, Luke Robinson was also wearing an earpiece at the Jan. 6 protests.

On Sunday Micajah Jackson sent us a photo of Ginger Gun wearing an earpiece on January 6.

And Luke Robinson is the second January 6er, along with Ray Epps, who was dropped from the FBI most-wanted list. They are two of the three protesters who had their photos and number removed from the list.

In January Micajah confronted Luke Phillip Robinson aka. “Ginger Gun” in Arizona. Robinson was at the Jan 6 protests. He had a firearm and was wearing an earpiece. The FBI later removed him from their most-wanted list.

Via The KFK Report:

For those of you wondering how Luke Robinson and I are connected. The intro didn’t load. Here’s the intro. pic.twitter.com/FOCrXw2pAm

This infuriated the US government and the Biden DOJ.

The DOJ wanted Micajah to spend 60 days in prison for walking into the US Capitol on January 6.
In March he got 90 days in a halfway house, hundreds in fines, and probation.

We continue to investigate the curious case of Luke Robinson.

Why would the FBI release and erase the ONLY Trump supporter that day seen carrying a gun at the DC rally?

Who was he working for?