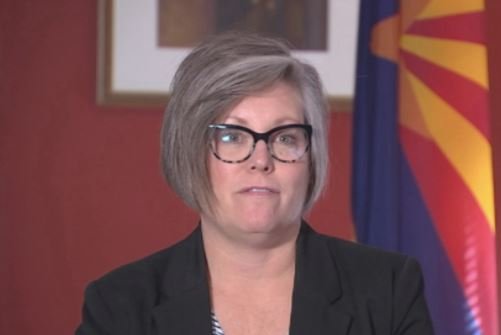 Yesterday, liberal extremist Arizona Secretary of State Katie Hobbs went on air to bash the Arizona audit in preparation for the coming reports.

She continues to claim that there was “NO fraud” and that this was the most secure election in history.

The Arizona Audit draft report was delivered to the Arizona Senate on Monday and a thorough review of the report for accuracy, clarity, and proof of documentation begins today.

TRENDING: Get Woke, Go Broke: New Orleans Saints Are Selling Tickets for Less than $1 After Team Requires Fans to be Vaccinated or Tested before Games

Page 56 of The Democratic Party 2020 Platform

The Democratic party platform supports post-election audits and full transparency of all results and data. Katie Hobbs hates that idea.

Reporter: How would you sum up the real world damage this sham audit has done to our election integrity our, faith in the process in Arizona and also around the country?

Hobbs: Well, its damage is the right word here, and the folks who initiated this have said that their intent is to bolster election integrity and in fact, they’re doing exactly the opposite. They’re continuing to sow doubt among those folks who already want to believe that there was fraud in the election. And these folks are unfortunately being misled by elected leaders who know better, they know that there was no fraud in the election, but for whatever reason, they’re gaining, you know, it’s, it’s furthering their political agenda to continue this, this big lie. And it’s it’s really unfortunate and it is doing damage, not just to folks’ confidence in the 2020 election but elections moving forward.

There is already doubt in our elections. It’s a reason so many do not vote.

When there is so much resistance to a forensic audit, it sows even more doubt in the election. Maricopa County and Katie Hobbs have fought this audit at every step.

They will steal elections moving forward if this audit isn’t finished.

These results will show us what she’s so afraid of.