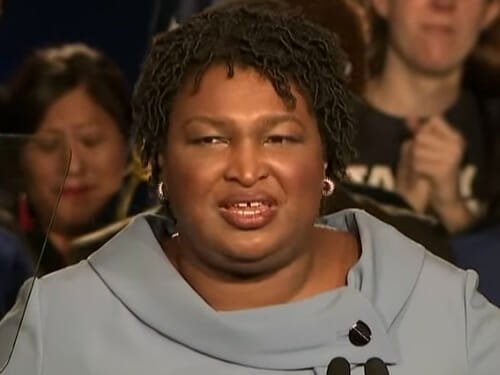 Democrat gubernatorial candidate Stacey Abrams on Saturday night told Georgians that Georgia is the “worst state” to live in.

Abrams, who is now worth more than $3 million after being in massive debt just a few years ago, owns at least two houses in Georgia, according to Fox News.

“I’m running for governor because I know that we have to have a conversation about who we are in this state and what we want for each other and from each other,” Stacey Abrams said on Sunday during a speech at the Gwinnett Democrats’ Bluetopia Gala, according to the Gwinnett Daily Post.

“Let me contextualize. When you’re number 48 for mental health, when we’re number 1 for maternal mortality, when you have an incarceration rate that’s on the rise and wages that are on the decline, then you are not the number 1 place to live,” she sadi. “Georgia is capable of greatness, but we need greatness to be in our governor’s office. We need someone who actually believes in bringing all of us in there together,” she added.

GA may be #1 place for biz, but we’re #48 in mental health, #2 in uninsured. #1 in maternal mortality & new HIV cases, #9 in gun violence. For too many, Kemp’s Georgia doesn’t include them. Why? Because #KempDoesntCare

As Governor, I’ll lead #OneGeorgia that’s #1 for all of us.

Stacey Abrams may think differently, but I believe Georgia is the best state to live, work, and raise a family.

And Marty, the girls, and I will work hard every day from now until November to keep it that way for four more years! https://t.co/T77LF1DroP