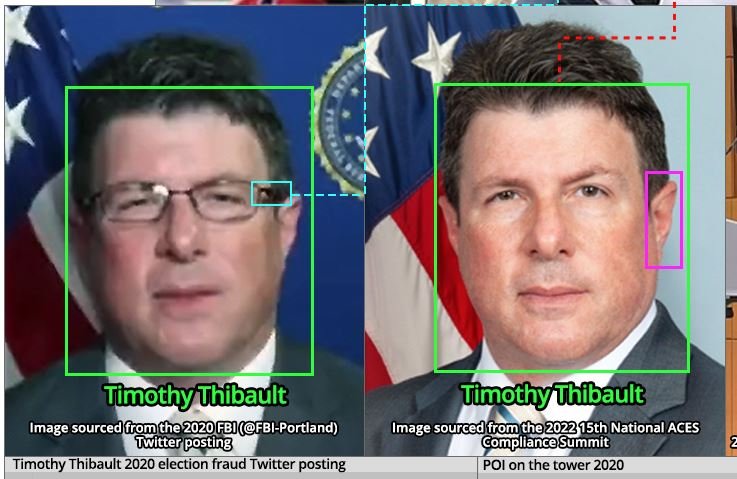 Thibault was also the operative who was the FBI spokesman for election integrity before the 2020 election.

Back on October 22, 2020, Tony Bobulinski held a press conference that has since been viewed over 2 million times. Bobulinski is the CEO of Sinohawk Holdings which was a partnership between the Chinese operating through CEFC/Chairman Ye and the Biden family.

TRENDING: The FBI Ordered Informant Igor Danchenko to Erase All Evidence from His Phone of His Role in Their Attempted Coup of President Trump

In his press conference, Bobulinski claimed he met with Joe Biden at the Beverly Hilton on May 2, 2017. Tony Bobulinski was joined by Hunter Biden, Jim Biden and Joe Biden and they discussed the Biden family’s business plans with the Chinese.

It was also during this press conference that Tony Bobulinski shared the infamous email that described the payment schedule including 10% held for the Big Guy, who is Joe Biden.

Later, Bobulinski sent a text to Jim Biden, Joe Biden’s brother, on the same day, May 2, 2017, saying: “Great to meet u and spend some time together, please thank Joe for his time, was great to talk thx Tony b.”

Joe Biden famously lied to the American public at a 2020 presidential debate when he claimed that his son Hunter Biden didn’t make money in China or engage in unethical overseas business deals. During the debate Biden said, ‘My son has not made money in terms of this thing about, talking about China.’

This was clearly a lie.

And now there is more evidence of Joe Biden’s meeting with Bobulinski at the Beverly Hilton.

Joe Biden spoke at Milken Institute Global Conference in 2017. It was held at the Beverly Hilton, the same hotel where he met with Tony Bobulinski the night before.

Yaacov Apelbaum also produced several items of evidence — previously reported by Joe Hoft at The Gateway Pundit — confirming Bobulinski’s assertions are legit. Apelbaum even has evidence of payments from China.

And now witness Bobulinski says it was Timothy Thibault, who was walked from the FBI offices last month, who helped bury information about the Biden Crime Family that he gave to the FBI.

Now retired FBI Agent Timothy Thibault, who is collecting his full pension and retirement, told GOP investigators to pound sand. He won’t comply with their demands.

The FBI conducts itself as if the GOP is a bunch of eunuchs because that’s exactly what the GOP has always been. They have no fear of a GOP majority. None. That is such an indictment of the GOP. https://t.co/1bkLzVkAQw