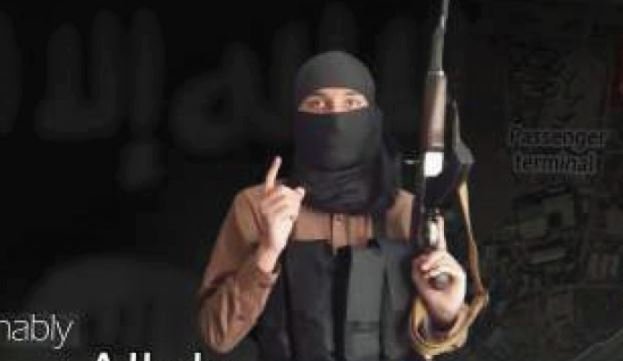 Joe Biden abandoned Afghanistan’s Bagram Airfield after nearly 20 years in July by shutting off the electricity and slipping away in the night without notifying the base’s Afghan commander, who discovered the Americans’ secret departure more than two hours after they left.

The Taliban quickly took control of Bagram Air Base, which is only 30 miles north of Kabul, on August 15th and released thousands of terrorists held at its prison. The Americans and Afghans left the Taliban military equipment, uniforms, rations and even sports drinks.

The Gateway Pundit reported last September that the ISIS suicide bomber who murdered 13 US servicemen and women and 169 Afghans was released by the Taliban from the Bagram Base prison in July.

TRENDING: BREAKING… Feds ARREST Gavin McGinnes During Live Broadcast Over Jan. 6 — Despite the Fact HE DID NOT GO to DC on Jan. 6

But the Biden regime refuse to identify the ISIS killer behind the Kabul attack. The same ISIS killer they allowed to escape from Bagram Air Base.

The blood of our sons and daughters are on their hands.

One year ago today Islamic terrorist Abdul Rehman killed 173 afghans and 13 Americans at the Kabul Airport.

One year after the deadly ISIS-K suicide bombing that killed 13 U.S. service members at the Kabul airport, the Biden administration has not publicly identified the bomber — despite numerous reports and anonymous officials saying the attack was carried out by Abdul Rahman al Logari, who had been freed from prison at the abandoned Bagram Airfield in August 2021 when the Taliban took over Afghanistan.

The attacker’s alleged identity is something of an open secret in national security circles and on Capitol Hill, but the Biden administration has continually refused to confirm that Logari was indeed the bomber who killed 13 U.S. troops and wounded 45 more. The Aug. 26, 2021, attack also killed nearly 200 Afghans and wounded dozens more as the United States led evacuation operations at the Hamid Karzai International Airport with the Taliban, including Haqqani Taliban faction forces, providing security outside the airport.

Logari is said to have previously been held at Parwan Detention Facility, next to Bagram Air Base, but was subsequently released by the Taliban when they took over Afghanistan in mid-August 2021 following a chaotic U.S. withdrawal. The Taliban, the Haqqani network, and al Qaeda are deeply intertwined in Afghanistan.

When asked about Logari’s identity, the State Department referred the Washington Examiner to spokesman Ned Price’s press briefing remarks on Monday related to an after-action review on Afghanistan being conducted. Price said, “We’d refer you to the Defense Department for anything further” on the Kabul bombing.

Price had said Monday that Secretary of State Antony Blinken had ordered an “after-action report … in the aftermath of the U.S. military withdrawal from Afghanistan.” He added, “We wanted to see to it that the review could be as comprehensive and as accurate and reflective as possible. And so, for that reason, the review itself is classified.” Price said nothing specific about the bomber.

As reported earlier…
ISIS suicide bomber Abdul Rehman was incarcerated at the Bagram prison for the past four years until he was set free by the Taliban terrorists.

Story claims Kabul airport bomber was an Afghan IS-K member who planned an attack in New Delhi. CIA detected threat in 2017, notified RAW. RAW nabbed him, gave him to US which sent him to Bagram. Taliban released him and he kills 169 Afghans/13 US soldiers https://t.co/X1VZqzmVrr

The Islamic State suicide bomber who killed at least 169 Afghan civilians and 13 United States soldiers outside Kabul airport last month was incarcerated in Afghanistan’s notorious Bagram prison for the past four years, thanks to Indian efforts, Firstpost has learnt through credible intelligence sources.

Senior Indian intelligence sources familiar with the case have told Firstpost that he was handed over to the United States’ Central Intelligence Agency by the Research and Analysis Wing in September 2017. However, the jihadist walked free on 15 August along with thousands of other dangerous terrorists held in the high-security prison, taking advantage of the chaos that ensued in the aftermath of the United State’s hurried exit and the Taliban’s swift takeover of the entire country.

Identified as Abdul Rehman, the jihadist was a former student of an engineering college in India and hailed from Afghanistan’s Logar province. He was the son of an Afghan merchant who frequently visited India for business.

His arrest had led to the termination of a plot by the Islamic State of Khurasan Province (IS-K) — the Islamic State’s regional wing in Afghanistan — to stage suicide bombings in New Delhi and other cities across the region, probably on the behest of Pakistan’s Inter-Services Intelligence Directorate (ISI).

Sawt al-Hind mentions that Abdur Rehman al-Logari was arrested 5 years ago in India before he could carry out a suicide attack in Delhi (to avenge Kashmir) and deported to Afghanistan. He did not go home and struck Kabul airport. https://t.co/PGUxDkyvjf

Abdur Rehman al Logri, an ISIS fighter, who carried out the devastating Kabul bombing which resulted in the death of more than 250 people, was arrested in New Delhi five years ago and deported back to Afghanistan before the attack.