Dishonest MI SOS Warns County Boards They Have NO Authority To Conduct Election Audits…Dominion Warns: Do NOT Transfer Voting Machines To “Unaccredited” Auditors 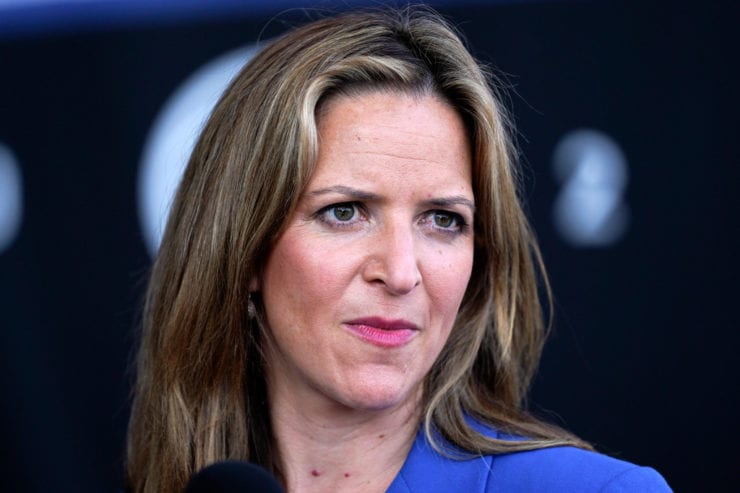 MI Secretary of State Jocelyn Benson is unlikable and untrustworthy.

100 Percent Fed Up – We’ve reported on numerous occasions about the lies that Michigan’s Secretary of State Jocelyn Benson has told the media since the November election. Yet, Michigan’s far-left media continues to treat Benson as a public leader with integrity and/or character. Meanwhile, nothing could be further from the truth.

On March 16, Michigan’s crooked Secretary of State Jocelyn Benson was again exposed for attempting to affect the outcome of the election when a Michigan judge ruled that Benson did, in fact, direct city clerks to ignore signature matching law on absentee ballots in the 2020 election.

The Democrat SOS was added to the Antrim County, MI voter fraud court case as a defendant by Michigan’s lawless Democrat Attorney General Dana Nessel. Instead of offering help to do a proper audit in Antrim County and thereby alleviating everyone’s fears about a possible rigged election, Benson’s attorney fought tooth and nail to ensure that judge would dismiss Bill Bailey’s case. Matt DePerno, Bill Bailey’s lawyer, has questioned Benson’s pushback on their discovery into what went wrong with the voting machines in the November election since the start of the case.

In December, MI Democrat Secretary of State Benson refused to testify about the election in front of the House Oversight Committee.

“I have concerns that the hearing could further the lies about the election that continues to undermine Michigan voters’ faith in the outcome and are now the rationale to legislatively restrict their voting rights,” Benson said.

Benson appeared on Detroit’s WJR radio one week after the election, where she was asked by conservative host Frank Beckmann why Republican poll challengers were locked out of the process? Instead of answering the host honestly, Benson did what she does best, she lied. Benson lied about how “Detroit Police” had to put “paper” over the windows because the “windows were being broken” by GOP poll challengers who were locked out of the process.

“We welcome transparency,” Benson said while ignoring the blatant attempt to hide the count of military ballots from GOP poll challengers. Benson then accused GOP workers of crossing the line and interfering in the vote-counting process, accusing them of trying to stop voters from casting their ballots simply because they were reacting to being locked out of the process. “But it does cross the line when people get destructive or try to interfere or stop the count, or in other words, stop the process from happening—stop voters from casting their ballots,” she told Beckmann.

134 tables were getting ready to count military ballots. Of that number, only an estimated 40 poll workers were able to watch the ballots being processed. In contrast, over 100 GOP poll challengers were locked outside and unable to participate in the absentee counting process.

Fortunately, I was on hold waiting to talk to Frank Beckmann during MI Sec. of State Benson’s segment and was able to call her out for lying to his massive audience that covers a large portion of Michigan.

In addition to Michigan’s dishonest Secretary of State pushing back on forensic audits of the November vote, Dominion is also pushing back on forensic audits being performed on their voting machines. In a statement published by the far-left Washington Post, Dominion, who controls the counting systems, warns that transferring voting machines to “unaccredited” auditors would render the equipment “unqualified for use.”

From the Washington Post – In letters sent to the Cheboygan and Antrim county clerks last week, the office of Michigan Secretary of State Jocelyn Benson said the county boards have “no authority” to order audits — and instructed election clerks not to provide access to unaccredited outside parties to conduct them.

“Interest in granting access to unqualified third parties to conduct a ‘forensic audit’ may stem from misplaced reliance on ongoing misinformation, which has been repeatedly, comprehensively, and definitively debunked,” wrote Jonathan Brater, director of the Michigan Bureau of Elections, in a letter to Cheboygan County Clerk Karen Brewster.

In a separate letter to all Michigan counties that use its equipment, Dominion warned that transferring machines to unaccredited auditors could void licensing agreements and render the equipment “unqualified for official use.”

If Benson is truly all about transparency and free and fair elections, why is she working so hard to hide from public scrutiny?