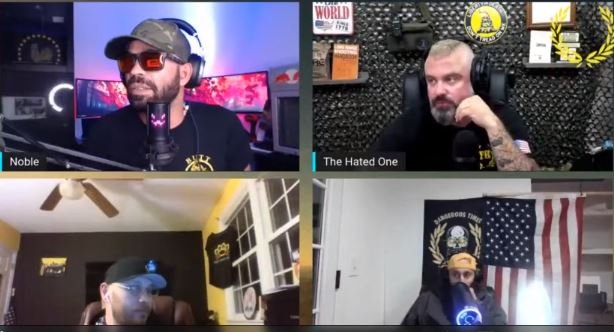 An incredible new video has emerged that exonerates the members of the Proud Boy fraternity from the ridiculous seditious conspiracy charges that the Biden Regime launched against them in their War On Trump and his supporters.

*SEE THE FULL NEVER BEFORE SEEN VIDEO BELOW!!

This Proud Boy leadership meeting was recorded back on December 30th, 2020- one week before the January 6th protest.

This video unquestionably proves that the Proud Boys never planned on going inside the Capitol on January 6th, let alone commit “seditious conspiracy”.

TRENDING: “I Am Really Disappointed in FOX, I Thought You Were Better Than CNN!” – BOOM! Kari Lake INCINERATES Bret Baier and FOX News for Pushing FAKE STORY on AZ Drag Queen (VIDEO)

This recorded Zoom meeting was leaked by an Indicted Proud Boy that had viewed it live.

The Department of Justice had confiscated this video from the phone of Proud Boy Chairman Enrique Tarrio and hidden it from the public.

Luckily, these DOJ geniuses did not realize it still lived on a hidden YouTube link or they surely would have forced their minions at YouTube to take it down.

The group then proceeds to discuss how they will defend themselves against Antifa attackers and avoid getting stabbed by not wearing their normal uniforms of black and yellow so they blend in.

They discuss the importance of organization, group leaders and formation. They drill in the importance of staying sober as to stay out of trouble. They pledge to stay away from women and avoid “normies” (non-Proud Boys) so they can march in an actual straight line and avoid losing each other on the day of the march. They discuss the danger of wandering off alone to “take a leak”. They mention how charming they are. They insult a female that irritated them at a past rally. They chat about going to the Dollar Tree store to purchase cutting boards to put in their shirts to act as stab-proof vests in case of an Antifa attack (multiple Proud Boys were stabbed at a rally only a few weeks prior to this meeting by Antifa infiltrators). They talk about “beer tax” and poke fun at each other. They barely mention the Capitol or President Trump.

There is no evidence pointing to a group planning on taking over the government.

Yet, the maniacal prosecution and January 6th Selective Misinformation Committee have literally alluded to a baseless conspiracy theory that a drinking fraternity (the Proud Boys) and Oath Keepers somehow magically assisted President Trump in an “insurrection”. The government, Liz Cheney and Merrick Garland’s DOJ have been planting these seeds in the minds of their minions in the fake news and spreading this misinformation everywhere.

In fact, prosecutors stated on the record that the Proud Boys began planning the Capitol Attack on December 19th, 2020, directly after President Trump tweeted to his followers to come to Washington DC on January 6th.

Yet, this video was taken eleven days after that and shows NO CONSPIRACY TO EVEN ENTER THE CAPITOL.

The Indicted Members of the Proud Boy Drinking Fraternity, now know to the Biden Regime as “Seditious Conspirators”. A new video proves innocence.

“This video should prove once and for all to your liberal and moderate friends what demonic liars these people are,” said Tina Ryan of Citizens Against Political Persecution.

“They conscientiously FRAMED INNOCENT MEN- innocent American Citizens- for political power and gain. This will go down in history as one of the most organized attacks on the American people by their own Government.”

Apparently, a reporter at the New York Times was also able to view the video after the very recent leak. We assume he was very surprised (to say the least) by its contents. Only a few days prior the New York Times had published a hit piece on the Proud Boys, including a video called “How the Proud Boys Breached the Capitol on Jan. 6: Rile Up the Normies.”

“After viewing this new evidence that the government withheld from the media and manipulated in court documents, perhaps this particular journalist realized the media has been misled by the Department of Justice.” said Ryan. “It seems he is fair in this new piece.”

See the blurbs below in italics from Alan Feuer’s New York Times article:

“The meeting, on Dec. 30, 2020, marked the founding of a special new chapter of the Proud Boys called the Ministry of Self-Defense. The team of several dozen trusted members was intended, Mr. Tarrio told his men, to bring a level of order and professionalism to the group’s upcoming march in Washington on Jan. 6, 2021, that had, by his own account, been missing at earlier Proud Boys rallies in the city.

Over nearly two hours, Mr. Tarrio and his leadership team — many of whom have since been charged with seditious conspiracy — gave the new recruits a series of directives: Adopt a defensive posture on Jan. 6, they were told. Keep the “normies” — or the normal protesters — away from the Proud Boys’ marching ranks. And obey police lines.

The prosecution has claimed that the Proud Boys began to plan their assault as early as Dec. 19, 2020 — the day that President Donald J. Trump posted a tweet announcing his Jan. 6 rally and saying it would be “wild.” But the video conference shows that, just one week before the event, when Mr. Tarrio and other Proud Boys leaders gathered their team for a meeting, they spent most of their time discussing things like staying away from alcohol and women and taking measures to ensure their own security.

The recorded meeting makes no mention of any planning that might have occurred in the week directly before the Capitol attack. And while Mr. Tarrio suggests during the meeting that the complex structure he created for the Ministry of Self-Defense was meant to be self-protective — not offensive — in nature, prosecutors have claimed that the group’s “command and control” design was instrumental in facilitating the Capitol attack.

Lawyers for the Proud Boys say the recorded meeting is a key piece of exculpatory evidence, contradicting claims by the government that a conspiracy to attack the Capitol was hatched several weeks before Jan. 6.”

YES- that was from the New York Times. Liberals read that.

The January 6th Committee is panicking as their lies are finally being revealed in the mainstream media.

*Please see the entire UNEDITED version of the video here. We want to give you the option of seeing the video in its entirety so you know that nothing of importance was edited out.

Warning-this video may incriminate these men for having filthy mouths and offensive speech habits, but NOT of Seditious Conspiracy!

This video has been mentioned in court hearings but was not available to the public until today.

The prosecution had viewed the recording in its entirety, and cherry-picked out bits to misconstrue evidence to incriminate the defendants.

“These sick demonic people literally knew the Proud Boys were never planning on going inside the Capitol,” said Tina Ryan of Citizens Against Political Persecution. “They saw this tape. Yet they made the conscious decision to manipulate the contents of this video and present it to the judge and the public with the malicious intent to smear these men and jeopardize their lives and fair trails.”

Proud Boy Pals and Drinking Buddies Enrique Tarrio and Joseph Biggs at a rally before they were charged with Seditious Conspiracy by the Biden Regime.

The January 6th Select Committee undoubtedly knew about this video as well- yet they still decided to move forward during their first hearing and nail the Proud Boys to a cross by knowingly accusing them of tremendous false crimes.

“The January 6th Hearings have made it impossible for the Proud Boys on this indictment to ever get a fair shake at a trial,” said Ryan. “They demonized the Proud Boys and accused them of seditious conspiracy in a ‘special video presentation’ before their trials. The Proud Boys charges should be dropped and these Congresspeople held liable for conspiring to falsify evidence.”

This is the perfect example of how the government continues to withhold important information from the people of the United States about a day as important as January 6th.

This is one of hundreds of unreleased videos that can potentially exonerate defendants.

“The court of public opinion will decide the fate of these men,” said Ryan.

Ryan ended with this:  “It is completely unethical that this type of evidence has been held from the public and manipulated to frame these men for the ‘crime of the century’. These prosecutors and Congresspeople must be held accountable.”

Cara Castronuova is a co-Founder of C.A.P.P. (Citizens Against Political Persecution and The People’s January 6th Commission. She is an Activist, Investigative Journalist, 2-Time Boxing Champion, Celebrity Fitness Trainer and Television Personality. You can watch her on Newsmax at 10PM EST every Saturday night on “Wiseguys”. You can follow her on & Twitter or Instagram  @CaraCastronuova. She is currently banned on Fakebook & suing them for defamation of character.  You can contact her via the C.A.P.P. website at www.CitizensAPP.us or www.caracastronuova.com if you have any tips or would like to volunteer.  She is also running for New York State Assembly (www.Cara4Assembly.com).

“I Can Do All Things Through Christ Who Strengthens Me.” Phil 4:13.