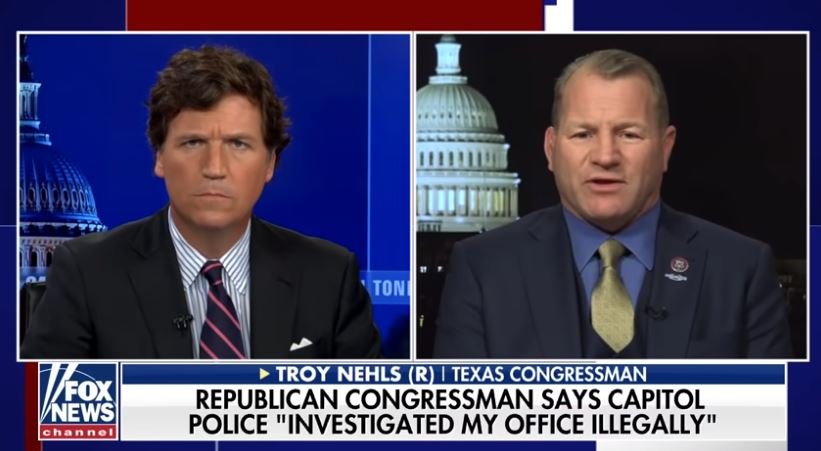 Earlier this year, U.S. Rep. Troy Nehls claimed that U.S. Capitol Police intelligence officers illegally entered his office in November and photographed legislative information and work. Nehls speculated that the actions resulted from his criticism of House Speaker Nancy Pelosi and the select committee investigating the Capitol events on January 6, 2021.

Rep. Nehls discussed this with Tucker Carlson back in February.

On February 4, 2022, Nehls sent a letter requesting that Michael Bolton, the now-retired inspector general, open a formal investigation into the events of November. The team at Gateway Pundit has extensively reviewed this report and found the actions of the U.S. Capitol Police to be outside of the standard protocol. The report points to a need for restructuring and more oversight of the agency that, without, could result in a problem with national security.

The most significant concern of Nehls and his team members is the unnecessary activity of entering his private office and undue investigation into the contents of his office. Those contents were related to forthcoming legislation and were tied directly to national security matters.

Nehls has maintained that Capitol Police illegally entered his office and took photographs of its contents. He has stated that the U.S. Capitol Police (USCP) later conveyed possible nefarious meaning to the contents. The special investigators from the USCP used the contents to point to Nehls’ potential involvement in illegal or improper activities.

Congressman Nehls said the USCP first entered his office on November 20, 2021, which the IG report confirms. According to the filed report, Officer Diaz stated the office door was “wide open,” and the office was unattended.

After discovering no person present inside the office, Officer Diaz photographed a whiteboard containing the words “body armor, China, and import” and a drawing of a U.S. Capitol building with an X on it. He reported the image as suspicious and turned over the report to Officer Thomas Andriko of the Threats Assessment section.

Then on November 22, according to Nehls, officers dressed in plain clothing attempted to reenter the Nehls’ office, where they encountered a staff member. After meeting the member of Nehls’ team, they inquired about the photo and contents in question.

According to Thomas Manger, Chief of the U.S. Capitol Police, the inquiry produced sufficient evidence to dismiss concerns, and there was no ongoing investigation.

Nehls has maintained that a door to his office could not remain open unless manually propped with another object. One former staff told investigators that “gravity” causes the door to close and noted that the team had a habit of “locking the doors after hours.”

The IG report found that all three exterior doors leading to the internal offices “close automatically when released.” It also noted that all doors “automatically lock when closed.” The report clearly states that the only methods of keeping the doors open would be to prop open each door with another object or leave the lock bolt engaged.

In the IG report and the initial report filed by officer Diaz, he states that the door was “wide open and the lights were on,” prompting him to enter the office. In the official report, Officer Diaz says that “nothing was propping the door open during a later interview.”

Officer Diaz’s statement contradicts the facts of the report and the condition of the premises.

The IG report also verifies that the three officers who returned to Nehls’ office on November 22, 2021, were dressed in plain clothes as part of their assignment. The IG report confirms Nehls claims they were dressed much like construction workers.

Nehls has expressed that he was the focus of a wrongful investigation, insinuating he was involved if dishonorable actions that put the Capitol and other lawmakers at risk.

During the return visit by the USCP on November 22, the three officers spoke to former staffer Jay Campbell. Campell said the officers gave the impression that due to the contents of the photograph, Nehls was being investigated for “importing Chinese body armor into the loading dock” of the U.S. Capitol.”

Campbell clarified that the verbiage captured in the photo taken in the office referred to legislation being drafted by Nehls to stop the importation of Chinese body armor. He also clarified that the “X” drawn on the map pointed an intern to an ice machine the week prior.

Nehls has provided multiple copies of the communications between his office and the USCP. There was no mention of a photograph taken by Diaz in the initial report, but it did appear later in documentation which was updated on January 6, 2022. This later update was explained as a clerical delay in the IG report.

No records of the internal use or distribution of the report, photo, or investigation have been conveyed. The IG report notes that USCP has severely outdated standard operating procedures. The report also says that more than a half dozen individuals received an emailed copy of the photograph, but no official archive, tracking, or catalog exists.

This issue raises concerns that members of the USCP can access and distribute sensitive information in the private offices of lawmakers. Such actions could put at risk the work of legislators and the safety of the internal operations of the U.S. Capitol.

The IG clearly states that there is no official protocol for taking photographs inside the lawmaker’s offices, nor is there a protocol for using and distributing those items.

According to the IG report, the issuance of cameras to USCP was not a standard practice until early 2021.

The report filed by Officer Diaz during the initial event is called a PD-76, which the IG report notes is used when an officer encounters or stops another person. It was an improper report to be filed since no other person was present. The reporting error was never corrected, foregoing the proper procedures as outlined in the IG report.

The IG report confirms the concerns of Nehls. It shows that his office was improperly, possibly illegally, entered. It further indicates that sensitive information was photographed and distributed, and a follow-up internal investigation took place. The report recommends a complete overhaul of the procedures and systems of the USCP and urges greater oversight of the agency’s operations.