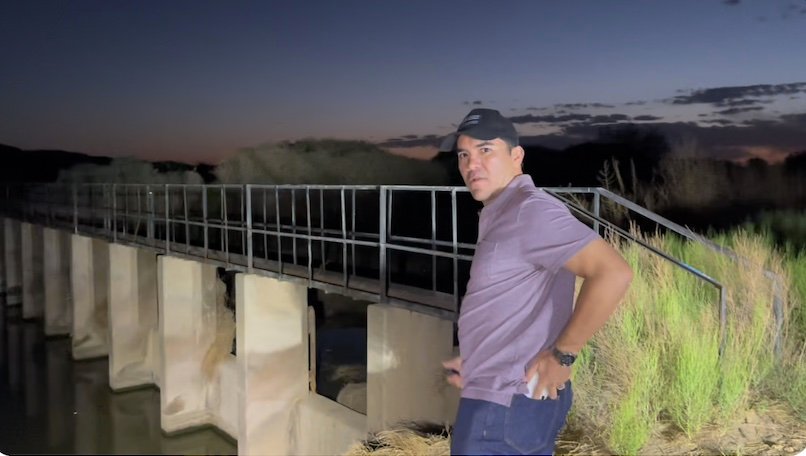 Retired Supervisory Special ICE Agent and author of the true story, “Agent Under Fire,” Victor Avila, traveled to the southern border to investigate how well Joe Biden and Kamala Harris are protecting our national security. What Avila found was astounding.

100 Percent Fed Up – In Avila’s first video, he can be seen hopping over puddles to get to the Mexico-U.S. border as he easily makes his way across the Rio Grande in Hudspeth County, TX, east of El Paso County.

In his next video, Avila shows an actual bridge that stretches from Mexico to the U.S. Victor filmed the bridge in the dark of night and showed viewers where drug cartels are dropping off drugs for drug dealers to move across the bridge and into America.

On Friday, Patty McMurray of 100 Percent Fed Up, and Joe Hoft of the Gateway Pundit spoke with Victor Avila. They discussed the exploitation of children on our border to help drug cartels and dangerous criminals walk freely into the United States.

Avila explained to Patty and Joe that several miles of our southern border is not even being patrolled because our border agents are being stretched so thin. Instead of stopping rapists, child predators, and drug cartels from crossing our border, they are changing diapers of babies in holding facilities where over 20,000 children have been processed.

“The morale is on the floor, Patty; it is bad!” Avila told Patty McMurray of 100 Percent Fed Up when asked about how the US Border Agents are dealing with this massive invasion of our nation under Biden. “They want to do their jobs—they love doing their jobs, but they’re not allowed to do their jobs as outlined in their description of duties,” Avila said. He added, “They told me, ‘Listen, Victor, we don’t know how to take care of kids and transport and be medical assistants. This is not what we went to the academy for.” He added that border agents feel like they have no backup under “President” Biden.