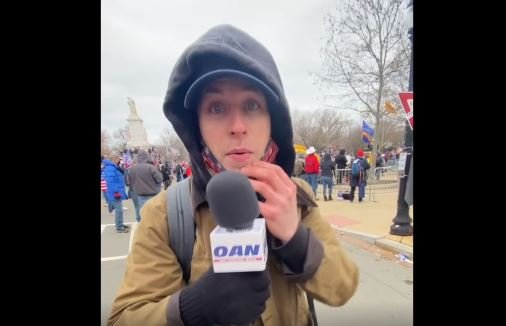 Two far left activists infiltrated the Jan. 6 protests in Washington DC dressed as conservatives and carrying an OAN microphone. The two men breached the US Capitol grounds that day. They later were visitied by the FBI in February and gave the agents tips on how to infiltrate a Trump rally.

They were carrying an OAN microphone.

The men, Walter Masterson and Peter Scattini, appear on The Young Turks program and routinely disguise themselves as Trump supporters.

This is an incredible report by Some B*tch Told Me.

MEET WALTER MASTERSON & PETER SCATTINI
Walter Masterson is a “New York City actor and TikTok comedian” complete with his own IMDB page. Walter has a very sarcastic method of delivery, which I’m quite certain he will attempt to weaponize when I publish this article. He varies between serious and ridiculous so often, likely in an attempt to deflect when any criticism comes his way.

…Here is the source video where I got the footage, queued up to the exact moment above:

MASTERSON AND SCATTINI WERE INSIDE THE CAPITOL BREACH, THEY WERE NOT JUST PRESENT THAT DAY.
Seen here:

In a Vlog published on February 17, 2021, Scattini details how two FBI agents and one member of NYPD visited him at his apartment to discuss their being at the capitol on January 6th. The FBI seemed to not be concerned about the fact that they were both inside the capitol breach as well as impersonating news outlets. In fact, Scattini says, “Walter is giving them tips on how to infiltrate Trump rallies.”