FBI Investigated Decision by NIH, Fauci and Dr. Collins to Fund Wuhan Lab – And Its Controversial Testing of Bat Coronavirus — BUT SAID NOTHING! 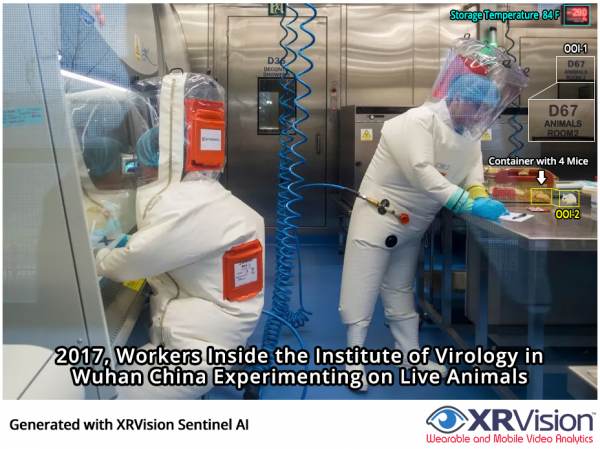 New documents released by Judicial Watch reveal the FBI was investigating the decision by the National Institute of Health (NIH) to fund the Wuhoan lab where the scientists were performing gain of function research on bat coronavirus.

In early April of 2020 TGP reported that the China coronavirus (COVID19) most likely came from the Wuhan Institute of Virology. After years of denials and disputes the head of the WHO believes this is where it came from as well.

We reported in a series of articles in April of 2020 that the probable epicenter of COVID19 was the Wuhan Institute of Virology. This was refuted by experts in the field and our reporting was denounced by those involved intimately in the origins of COVID19.

Judicial Watch reported the FBI was investigating the Wuhan lab’s gain of function testing back in May 2020 — at the same time Dr. Fauci and Dr. Collins were scheming to deny their link to the Wuhan lab.

TRENDING: STEVE BANNON ON FIRE! Video Recaps from Days 1 and 2 of Political Show Trial — PLUS STEVE BANNON SPOUTS OFF ON MEDIA! (Video)

In an email dated May 22, 2020, with the subject line, “Grant Questions – FBI Inquiry – 1-R01A1I110964-01 – 2-R01AI110964-06,” Ashley Sanders, a senior investigations officer in the NIH Division of Program Integrity, within NIH’s Office of Management Assessment, emails David A. Miller, an agent at the FBI’s Newark Field Office to inform Miller, “In preparation for our call on Tuesday, Erik [Stemmy] (cc’d) has provided responses to your initial questions below (also attached).” Also copied on Sanders’ email is Mike Shannon, whose email address indicates he works in the NIH Office of the Director. The responses are completely redacted but are labeled “SF [Standard Form] 424 AI110964-06 (received date 11/05/2018),” which refers to NIH grant award R01AI110964, “Understanding the Risk of Bat Coronavirus Emergence.”

The House Republican Oversight Committee members released never before seen emails in January 2022 showing Dr. Fauci “may have” concealed information about COVID-19 originating from the Wuhan lab and then intentionally downplaying the lab leak theory publicly.

This is on top of the evidence we already have on Fauci and the lab leak.

Boom! Mark Meadows Exposes Fauci’s Lies on Gain-of-Function Funding: “It Was Intentional – They Need to be Held Accountable for Their Actions” – War Room Video

Here is one email from former NIH Director Dr. Collins to Fauci and others back in April 2020 when they were trying to hide their connections to the lab.

It’s clear they are trying to “put down” the accusations. He even says it!

And now we know Chris Wray’s FBI was investigating this link between top US doctors and the Wuhan lab but said nothing.

The FBI knew the truth and once again hid it from the American public.

Newly released government records reveal the FBI investigated a decision by the National Institutes of Health to issue a grant that was tied to the Wuhan Institute of Virology.

NIH emails show the bureau was investigating possible gain-of-function research at the lab and possible failures to comply with reporting rules. The Chinese government lab has been suspected as the source of COVID-19.

The new information, uncovered by the conservative group Judicial Watch, shows that a senior investigations officer in the NIH Division of Program Integrity named Ashley Sanders sent an email to FBI Newark Field Office agent David Miller in May 2020 with the subject line “Grant Questions – FBI Inquiry – 1-R01AI110964-01 – 2-R01AI110964-06.” The “R01AI110964” tag is the identifier for the NIH and National Institute of Allergy and Infectious Diseases award to EcoHealth Alliance titled “Understanding Bat Coronavirus Emergence.” A subaward from that was provided to the Wuhan lab.

The email to the FBI was also sent to NIH officials, including Erik Stemmy, and stated that “in preparation for our call on Tuesday, Erik (cc’d) has provided responses to your initial questions below (also attached).” The more than four pages of responses are completely redacted aside from a reference to the U.S. grant to EcoHealth…

…The Washington Examiner has previously reported that EcoHealth leader Peter Daszak was a longtime collaborator with the Wuhan lab who steered hundreds of thousands of dollars in NIH funding to the Chinese lab.