FBI Opened Doors at State Michigan Capitol COVID Protests in April 2020 – But No Violence without Fed Instigators Like on Jan 6? 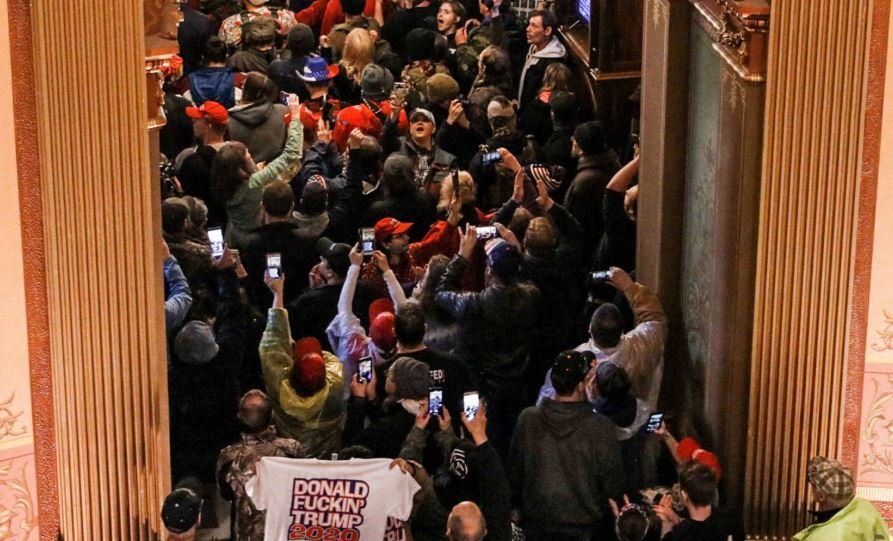 In April of 2020, there were protests at the Michigan Capitol.  Americans were livid with the crazy mandates in the state.  Citizens were armed but there was no violence.

On April 30, 2020, protestors of crackpot Michigan Governor Whitmer’s insane COVID social mandates entered the state Capitol.  There was no violence and no damage to the Capitol.  The protesters were reportedly armed.

TGP reported on the events that day.

TRENDING: THANK YOU TGP READERS! YOU ARE THE BEST! DC Gitmo Prisoner Thanks Gateway Pundit Readers for Raising NEARLY $2 MILLION for the Political Prisoners and Their Families (VIDEO)

The FBI and DOJ are now on their second try at convicting two men from Michigan who were set up by FBI goons and informants in what the corrupt government says was an attempt to kidnap crackpot Governor Whitmer.  The entire thing was a setup with the Feds being the individuals who created the idea in the first place.  After a hung jury a few months ago, the government decided to give the case another go.

Yesterday, a confidential human source used by the Feds in the setup testified in the case.  This individual shared that it was the FBI who made the decision to open the doors to the Capitol and allow the protesters to enter.

Dan Chappel, a confidential human source n the Gov. Whitmer kidnapping case, testified just now that he alerted his FBI handlers that he was concerned members of the Wolverine Watchmen, an armed militant group he had infiltrated, was preparing for violence outside the building. pic.twitter.com/oAFuF6kP2V

This FBI informant is was paid by the FBI to monitor the actions of the individuals the FBI was setting up.

Chappel is currently testifying in the retrial of two men accused of plotting to kidnap Whitmer (Adam Fox & Barry Croft, neither of whom were members of the Watchmen). Under cross, he is describing his actions to monitor the group during the spring and summer of 2020

The fact that the FBI was the entity that made the call to open the doors is important.  For one, this leads individuals to question whether it was the FBI who made the call to enter the US Capitol on Jan 6.  The doors there were opened from the inside as was reported by TGP previously.  Also, US Capitol police on Jan 6 invited the protesters into the Capitol (this is why any charges of tresspassing made by the corrupt FBI and DOJ are bogus.)

It was headed at the time by Steven D’Antuono.

He was promoted to take over DC FBI field office in October 2020–right before the Capitol protest.

Who made this call? https://t.co/OWZd3tnrj4

Also, of note is the fact that those who were invited into the Michigan state Capitol in April 2020 were armed.  (Protesters on Jan 6 were not armed.)  Why is it that there was no violence in Michigan and yet there was on Jan 6?  Armed protesters in Michigan created no violent acts.

Did the Feds learn from the Michigan protests and know they had to send in monsters like Ray Epps to create violent acts from the typically non-violent Trump supporters?  Makes you wonder.