Get Woke – Go Broke: Women’s US National Soccer Team Gets Skunked in 3-0 Loss to Sweden in Olympic Opening – Bounced from Tourney 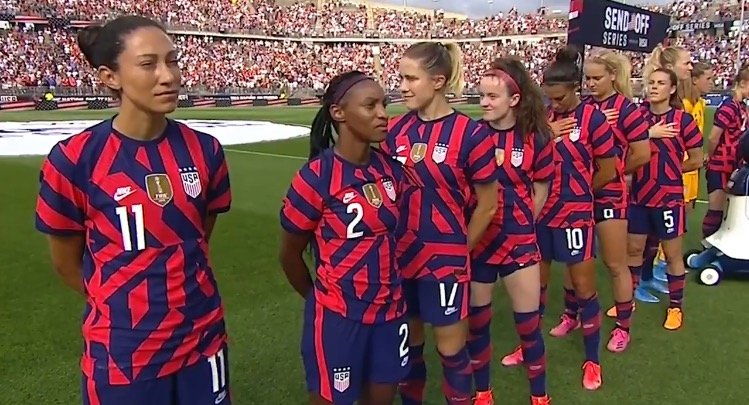 Earlier this month several women from the US soccer team turned away from the US flag as 98-year-old WWII veteran Pete DuPré played the national anthem on a harmonica.

The US women’s soccer team was playing an exhibition game against Mexico in East Hartford, Connecticut in a pre-Olympic sendoff game before heading to Japan.

The video is included for all to see.

The US Soccer Federation then corrected former DNI Richard Grenell for posting on this outrageous act of disrespect by the angry soccer players.
They said it wasn’t true.

TRENDING: FIREWORKS! Senator Rand Paul Rips Arrogant Fauci: “There Will be Responsibility For Those Who Funded the Lab, Including Yourself” (VIDEO)

This is not true. No one turned their back on WWII Veteran Pete DuPré during tonight’s anthem. Some USWNT players were simply looking at the flag on a pole in one end of the stadium. The players all love Pete, thanked him individually after the game and signed a ball for him.

The US Soccer Federation wanted Americans to believe these women who knelt for years to the National Anthem were suddenly pro-American.
Please, give us a break!

On Wednesday Sweden stunned the US Womens Soccer Team with a 3-0 victory in the women’s soccer tournament.
They’re out.

Sweden stunned the United States at the #Olympics with a 3-0 victory Wednesday in the women’s soccer tournament. The U.S., ranked No. 1 in the world and the favorites to win gold in Tokyo, had been riding a 44-match unbeaten streak ahead of the game.https://t.co/1xATIYOSvE

The US women’s team was just bounced from the Olympics.
Via The AP:

The Americans, ranked No. 1 in the world and the favorites to win gold in Tokyo, were riding a 44-match unbeaten streak heading into the match. But Sweden, ranked No. 5, has been the U.S. team’s nemesis of sorts in recent years. The Swedes bounced the Americans from the 2016 Rio de Janeiro Games in the quarterfinals, the earliest U.S. Olympic exit ever, by making a defensive stand.

This April, Sweden played the United States to a 1-1 draw in Stockholm, which snapped a winning streak dating back to January 2019 when the Americans lost to France in the run-up to the World Cup. It was the U.S. team’s only draw this year.

“Did we expect this result tonight? No,” said U.S. forward Megan Rapinoe, who did not start but came on as a substitute in the 64th minute with the score 2-0. “It’s frustrating, and it’s frustrating that it’s Sweden. They found a lot of space on us. I don’t even know how many goals we have given up this whole year. I don’t remember the last time we gave up a goal. So to give up three is not great.”

Wow! The US Women’s Soccer team loses their Olympic opener to Sweden. Sweden snaps the American women’s 44-match unbeaten streak with a 3-0 victory. @YamsTV has the details. #KOMONews #Tokyo2020 pic.twitter.com/d5lAFRK92a