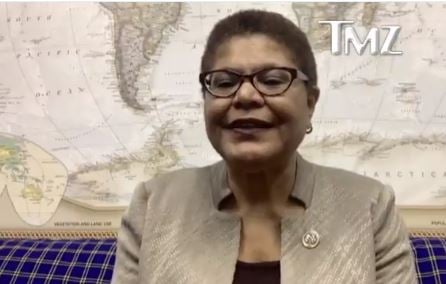 On Tuesday, Radical Democrat Rep. Karen Bass (CA) leapfrogged billionaire developer Rick Caruso – a Republican turned independent, who then turned Democrat – in the primary race for mayor of Los Angeles after a flurry of mail-in votes caused a massive eight-point swing in the voting results.

Caruso, who is running as a political outsider promising to fix homelessness and crime in the city and was leading the race by five points following the initial tally from in-person polls, is now trailing the extremely ‘progressive’ Bass by -3 with roughly 33% of the vote (245,000 ballots) left to count.

Many of the remaining ballots are mail-ins.

#BREAKING With the latest batch of ballots, Karen Bass takes the lead in the L.A. Mayor’s race.

There are still more than 245,000 ballots to count in LA County.

In the week since the polls were open on June 7th, Caruso’s lead dwindled as officials began counting the mail-in ballots, eventually leading to the shocking reversal in favor of Bass, a radical left-wing activist who religiously attacked President Trump during his time in office, leading the Democrat’s wild charge to impeach him twice while she served in Congress.

And it wasn’t just Bass who benefitted from a surge of late mail-in ballots. Far-left candidates across all races experienced a massive bump, including candidates for city attorney and several city council seats.

From The Los Angeles Times:

“Rep. Karen Bass pulled ahead of rival Rick Caruso in the primary election for Los Angeles mayor on Tuesday after a surge of vote-by-mail ballots boosted the congresswoman and several other progressive candidates.

Over the last week, a flood of late-arriving mail ballots propelled left-of-center candidates in races for mayor, city attorney and multiple council seats…

BREAKING: The campaign to recall LA DA @GeorgeGascon tells me they hit the necessary 567,000 signatures today, and have received 30,000+ signatures in the last few days alone.
They need 566,857 *verified* by July 6th, and are aiming for 650k + by then for “padding”. @FoxNews

But, as always, these mysterious, election-determining mail-in ballots favor the most radical Democrat in the race. Even when counties show massive shifts in public sentiment and voting patterns.

What’s more, the final tally of the LA mayoral primary is not expected to be released for “days or even weeks,” according to the LA Times. As we saw in 2020, nowadays election officials need all the time they can get to sort out the mail-in ballots and determine the ‘winner.’