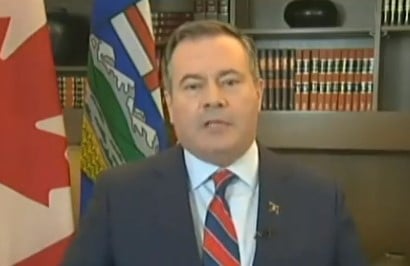 In response to Trudeau’s unprecedented actions Jason Kenney, the Premier of Alberta, Canada launched a Court challenge to the government’s invocation of the Emergencies Act.

Premier Kenney made the announcement on Saturday night.

TRENDING: “Everyone is at Risk for Blood Clots!” – CDC and Pfizer Issue Urgent Warnings on Blood Clots Even in “The Healthiest Athletes”

Alberta is filing a Court challenge to the unjustified use of the Emergencies Act.

We may also intervene in support of other Court challenges.

As Tommy Douglas said about the use of the War Measures Act in 1970, it’s like “using a sledgehammer to crack a peanut. https://t.co/lx53TNcaJb pic.twitter.com/QD98vKgc32

Alberta will launch a Court challenge of the Trudeau government’s invocation of the Emergencies Act, because it is:

Of course, the liberal hacks on CTV, a publicly funded fake news channel, attacked Premier Kenney for supporting the truckers.
Kenney put the reporter in his place.

It needs to go, along with pointless federal travel restrictions.

It’s time to get life back to normal.

Evidently, the Canadian liberal hacks are clones of their American cousins.