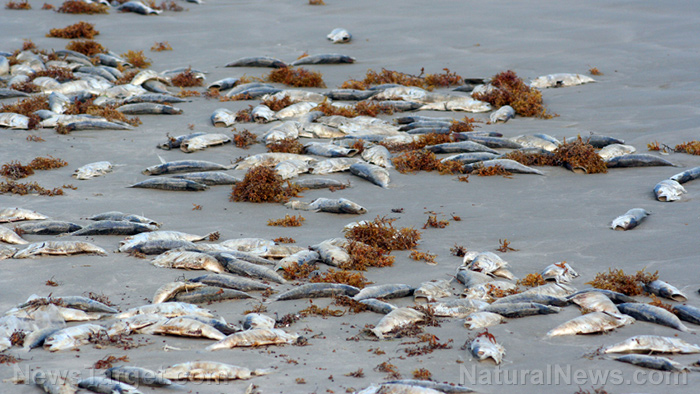 (Natural News)
It will cost the San Francisco government around $14 billion to upgrade their aging wastewater facilities that are dumping nutrients from treated human sewage into the Bay Area. Currently, wastewater is feeding a giant algae bloom, which has lingered for two months and has killed tens of thousands of fish.

The algae bloom started appearing in late July but have since grown due to the number of nutrients from the urine and feces of the eight million Bay Area residents that are released into the water daily. One plant alone dumps 85 million gallons a day containing around 5.5 tons of nitrogen.

Scientists say the bloom was triggered by climate change, but its size, amount of organisms and how long it has lasted so far are due to human waste. It has resulted in the death of up to 10,000 fish that were suffocated by the algae covering the bay.

No sewage leaks had been found from the 37 plants in the area.

The bloom, which first appeared in Alameda, is now along Sausalito, Vallejo and Fremont, which is about 40 miles from where it first appeared.

The discharge is said to have found its way into the bay during a major rainstorm and was not purposely dumped. This is one of the issues with aging infrastructure. (Related: Toxic algae problem becoming a risk to human health and the economy, experts warn.)

The $14 billion needed to update wastewater plant systems will be used to cap the amount of nutrients dumped into the Bay, and this could be required in 2024 when regional permits are up for renewal.

However, the steep price tag could also cost ratepayers triple the amount on their water bills.

A similar algal bloom event occurred in 2010 as millions of gallons of untreated sewage flowed into the Bay.

Algae blooms happen when colonies of algae grow out of control. They only need sunlight, nitrogen and phosphorous to expand.

The red algal bloom in the Bay Area is said to be caused by a microorganism called Heterosigma akashiwo, which is always present in the Bay. The many years of dumping nitrogen into the Bay have poised this bloom to be one of the biggest in over a decade.

Algal bloom kills fish by suffocating them under a thick layer of microorganisms. As the algae grow, other plants die and become food for bacteria.

Jon Rosenfield, a senior scientist with the environmental group San Francisco Baykeeper, said algal blooms are like wildfire in the water. Harmful blooms can harm people, animals or the local ecology, and this particular one caused the mass deaths of fish by producing toxins or depleting the water’s oxygen levels, or both.

People are urged to keep animals and children out of the water after Oakland officials found “low levels of contaminants associated with harmful algal bloom.”

Rotting fish carcasses have already piled up in the waters, and the stench of rotting fish is also said to be so intense that some of them are resorting to wearing face masks outside to cover their noses.

Watch the video below for more reports of fish die-offs.

This video is from the Perfect Society channel on Brighteon.com.

It’s a simple chain of cause-and-effect: Toxic green algae in Florida is the result of man-made pollution.