In Blow to Democrat Ballot Traffickers: Federal Judge Rules That Watching Drop Boxes For Voter Fraud Is Protected Under The First Amendment In Arizona After Marc Elias And Attorneys File Lawsuit 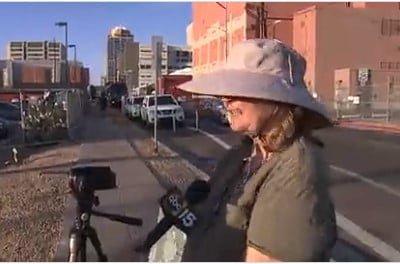 A federal judge has ruled that grassroots activists have the First Amendment right to peacefully assemble near dropboxes in Arizona and watch them for suspicious activity or voter fraud.

These are patriotic Americans who, unlike Democrats and delusional Republicans, prefer to hold elections that are free from fraud.

Of course, secure elections infuriates the left and their posse in the fake news.

TRENDING: This is Weird? Pelosi Assailant David Depape Was In His Underwear When Police Arrived – Yanked the Hammer from Paul Pelosi

Grigg’s coverage of these patriots and leftwing claims of “voter intimidation” sparked a lawsuit to stop patriots from exercising their right to peacefully observe drop boxes in the state.

Earlier this week, it was reported that lawyers with Marc Elias were in federal court to stop the drop box watchers in Arizona.

NEW: a hearing is about to begin in federal court to try and stop ‘self-appointed’ ballot box watchers in Arizona.

These are some of the lawyers with @marceelias

They represent the plaintiffs who are asking for a stop bc of voter intimidation concerns @abc15 https://t.co/1HCLqL25Y0 pic.twitter.com/lvyVb6C9J2

According to New York Times,

A federal judge on Friday declined to ban an activist group from gathering near ballot boxes in Arizona, arguing that the members’ actions did not appear to constitute a “true threat” or intimidation and that their right to assemble in public spaces is constitutionally protected.
In his 14-page ruling, Judge Michael T. Liburdi found that while “many voters are legitimately alarmed by the observers filming” at ballot boxes in Maricopa County, there was no proof that the group, Clean Elections USA, had encouraged acts of violence or posted personal or identifying information online.
“While this case certainly presents serious questions,” Judge Liburdi wrote, “the court cannot craft an injunction without violating the First Amendment.”
In denying the request, the judge said he would keep the case open and agreed to hear new evidence that the group has “engaged in unlawful voter intimidation.”
A lawsuit filed on Monday by two nonprofit organizations, the Arizona Alliance for Retired Americans and Voto Latino, alleged that the group’s intent was to dissuade people from voting through harassment and threats.

Watching the ballot box from a public street is perfectly legal, but Democrats think it is reprehensible.

The exclusive drop-box footage from the 2020 presidential election was obtained by The Gateway Pundit and Attorney John Burns.

The Gateway Pundit was THE ONLY MEDIA OUTLET in the country to obtain this footage following the suspect 2020 election.

The MC4EI team in Michigan spent hours scouring through the thousands of hours of security camera footage to put together this explosive 13-minute video.

Special thanks to Patty McMurray and 100 Percent Fed Up for her help in coordinating this effort.

The MC4EI team captured dozens of instances of ballot trafficking in the 2020 Detroit Election.

The fraud was captured on camera and in broad daylight.

As The Gateway Pundit recently reported, a mail-in ballot “error” left as many as 6,000 voters incorrectly flagged as not having proof of citizenship on file, designating them as federal-only voters who may receive a federal-only ballot. If a voter uses this incorrect ballot, it will reportedly be “sequestered,” and they will vote a second time on a full ballot.

There will likely be thousands of additional ballots thrown into the mix.

Arizona’s Fox 10 channel has also already called the race for Katie Hobbs in another apparent “error,” showing Democrat Katie Hobbs winning the race by 7 points 12 days before the election.

This is why the left and leftist media outlets do not want Patriots watching unsecured drop boxes.