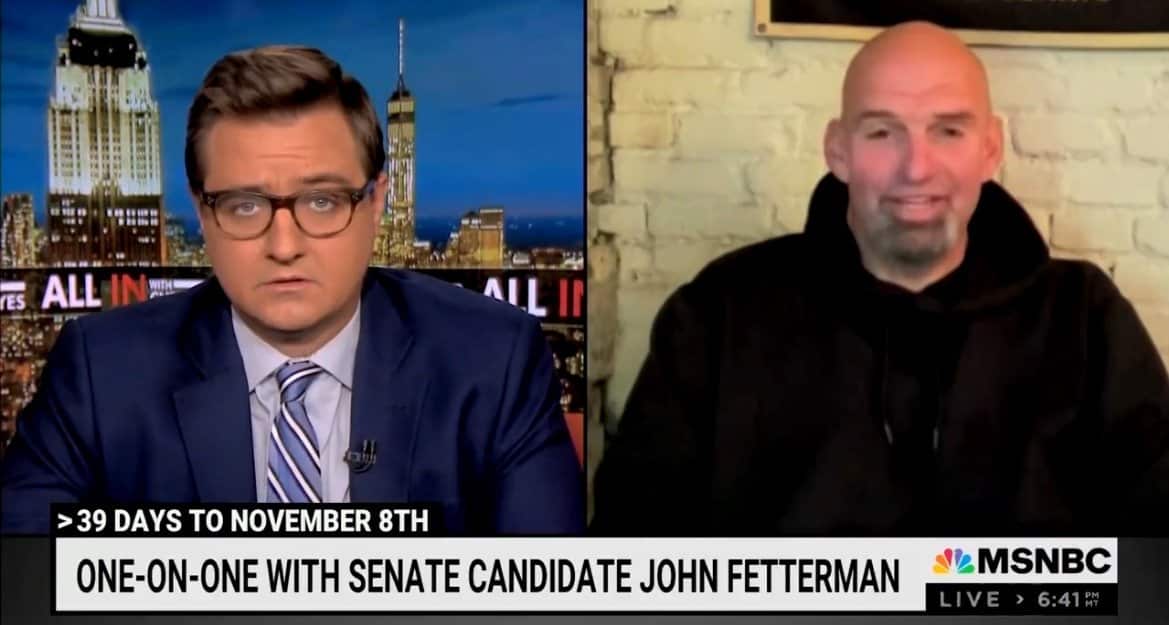 Pennsylvania Democrat US Senate candidate John Fetterman is totally shot after his massive stroke in May.

Fetterman is running against Republican nominee Dr. Mehmet Oz in the 2022 US Senate race in Pennsylvania.

Fetterman can barely string a sentence together.

This is why he’s waiting until October 25 *after early voting has already started* to debate Dr. Oz.

MSNBC’s Chris Hayes on Friday evening asked Fetterman how he was doing.

“I just wanted to check in and see how you’re doing,” Hayes said.

John Fetterman: “It’s not about kicking balls in the authority or anything.”

MSNBC host: “I just wanted to check in and see how you’re doing.”

John Fetterman: “It’s not about kicking balls in the authority or anything.”

Fetterman was referring to his latest campaign tweet that actually backfired on him.

John Fetterman, who looks like an overaged Antifa goon, is running a joke of a campaign.

“DC could use a kick in the balls” John Fetterman tweeted.

DC could use a kick in the balls 🤷‍♂️ pic.twitter.com/IYXN5YsKSF

In 2013 Fetterman chased a black man down the street who he thought was involved in shootings (turns out it was likely bottle rockets) in his neighborhood.

The black jogger told a local news outlet that Fetterman pointed the shotgun at his chest.

Here’s Fetterman in 2013 saying he “did the right thing” when he pulled a shotgun on an unarmed, innocent black jogger:

So John Fetterman held an unarmed black jogger at gunpoint because he believed the innocent jogger was a felon. Sounds pretty racist, where you at @KingJames? This Democrat senate nominee is out here hunting black people. pic.twitter.com/GuuKvmvnzi