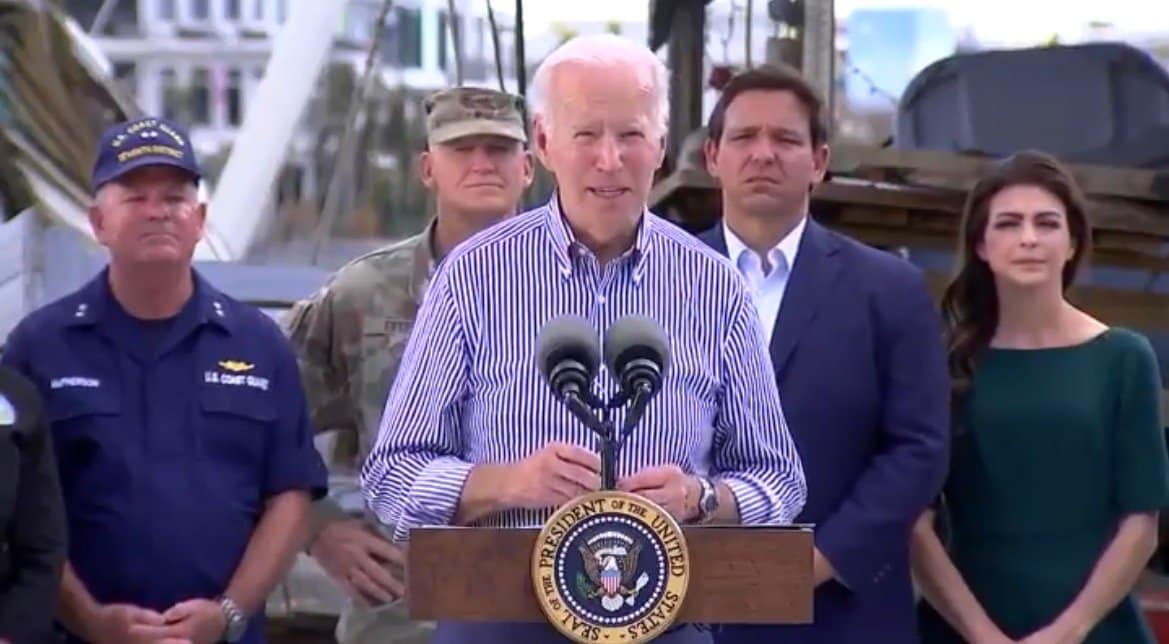 Joe and his handler Dr. Jill traveled to Fort Myers, Florida on Wednesday to survey the damage from Hurricane Ian.

Hurricane Ian decimated Fort Myers after it made landfall as a category 4 storm last week.

Dr. Jill upstaged her invalid husband, walked in front of him and was the first to greet officials as Joe lagged behind.

TRENDING: WATCH: Large Garbage Bag Used To Transfer Stacks of Absentee Ballots From Detroit Drop Box…Is This What SOS Benson Means When She Says MI Elections Were “Most secure in history”?

Biden immediately brought up climate change during his remarks on Wednesday.

As if people who just lost everything to flooding from a hurricane want to hear about non-existent climate change.

Biden also talked about himself.

Of course he did.

And it was all a lie.

Joe Biden falsely claimed a lightning bolt destroyed most of his home once.

“We didn’t lose our whole home, but lightning struck and we lost an awful lot of it,” Biden said.

Joe Biden claimed today that he lost “an awful lot” of his home in a fire from a lightning strike 15 years ago.

According to a report from the time, the lighting strike caused “a small fire contained to the kitchen” that “was under control in 20 minutes.” https://t.co/l5l9eJ7MK3 pic.twitter.com/8yxvkUABPa

This is one of Joe Biden’s favorite lies (he has many).

He told this same lie to Colorado wildfire victims earlier this year.

Biden also told a version of this lie last November during a stop in Woodstock, New Hampshire.

“And I know, having had a house burn down with my wife in it, she got out safely, God willing, but having a significant portion of it burn, I could tell 10 minutes makes a hell of a difference. It makes a big difference,” Biden said last November.

It turns out the house didn’t burn down.

Biden today: We “had a house burn down with my wife in it. She got out safely.”
2004 AP news report: “A small fire that was contained to the kitchen….Jill reported the fire…The fire was under control in 20 minutes.” https://t.co/2VcAebg9r5