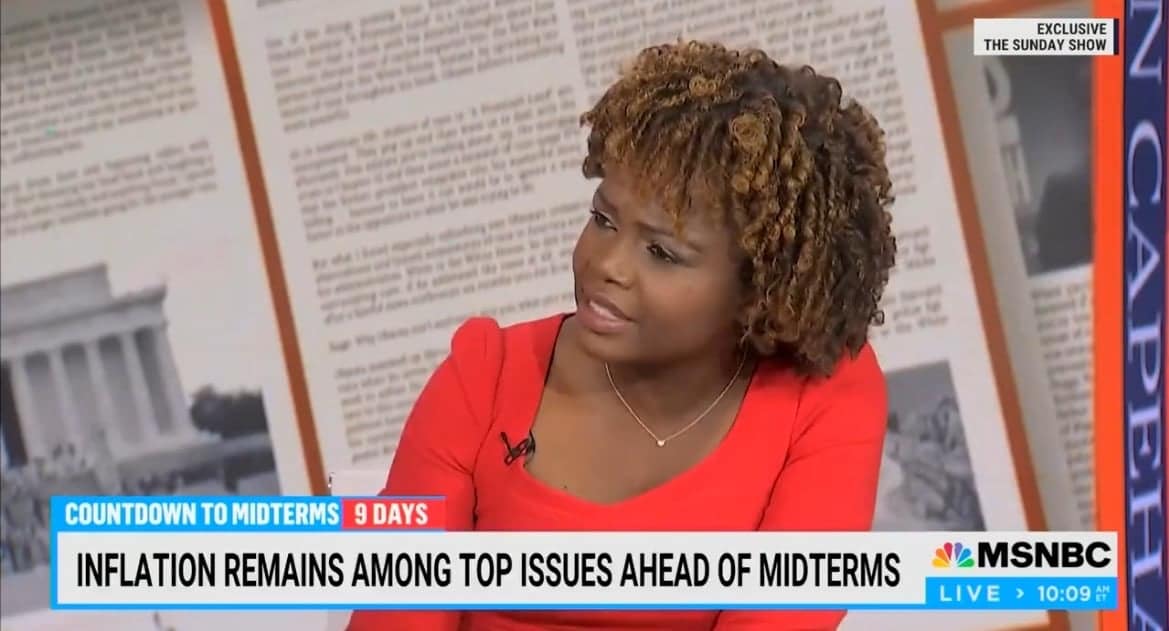 Karine Jean-Pierre immediately blamed Trump for the economic crisis even though he has been out of office for nearly 2 years.

“There’s a fear of looming recession. Poll after poll show that voters say they trust Republicans more than Democrats when it comes to the economy,” Capehart said. “What’s the Administration’s response that persistent view among the electorate?”

TRENDING: NBC News: David DePape ‘Was Able to Get into the Pelosi Bedroom Where Paul Pelosi Was’; Third Person Was in Home

Then she blamed Trump: “When the president walked into this administration, the economy was in ruins. It was in absolute ruins.”

The economy was in ruins because Democrats forcefully shut down businesses during the Covid pandemic.

Inflation was 1.4% when Joe Biden was installed in January 2021.

Inflation skyrocketed to over 8% (it’s even higher but that’s what the Regime is admitting to) after Joe Biden and the Democrats spent trillions of dollars on Marxist pet projects.

The US economy is in a recession because of Joe Biden and the Democrats in Congress.

30-year fixed mortgage rates are over 7% after the Federal Reserve raised rates 3 times in a row for a total of 225 basis points over the summer.

The GDP supposedly ‘accelerated’ at 2.6% in Q3, but as TGP’s Joe Hoft pointed out, the numbers just don’t add up for the average American.

After two consecutive quarters of negative GDP, the BEA claims that the GDP in the 3rd Quarter was up by 2.6%.

Looking further into the report it became clear that the entire increase in GDP is related to US exports in oil, gas and weapons.  Zerohedge reports:

This is the Biden economy.