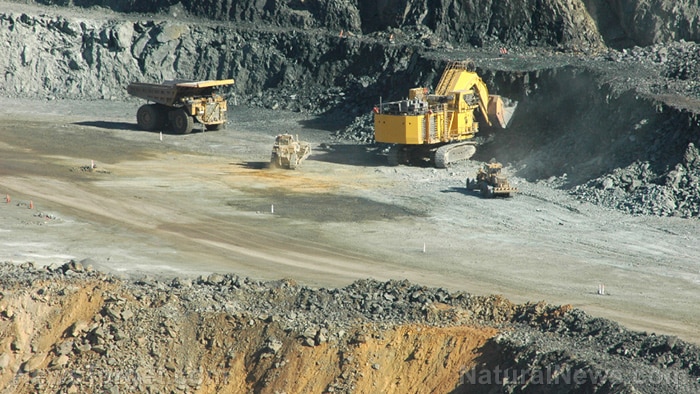 (Natural News)
Electric vehicles are promoted as the solution for combating “climate change.” Governments are currently incentivizing the production of electric vehicles, while punishing the fossil fuel industry. However, lithium mining for electric vehicles is incredibly destructive to the environment, and is about as far from “green” as one could imagine. Not to mention, most of the lithium-ion batteries produced today come from China and require water-intensive mining operations that ravage natural environments throughout Australia, Argentina and Chile. The process depletes ground water, and leaves behind toxic wastewater that contaminates fields and harms wildlife. The mining process is not carbon dioxide free, either. The mining process releases 15,000 kilograms of carbon dioxide emissions for every ton of lithium that is extracted.

When lithium is extracted from salt mines, the miners must drill into the salt flats and pump out a salty, mineral-rich brine. The brine is placed in large pools, so the water can evaporate out. When the brine evaporates, it leaves behind a sludge of potassium, manganese, borax and lithium salts that must be filtered out further. The process pollutes nearby aquifers and lowers the water table, interfering with water sources in the local environment.

The lithium extraction process takes several months, displaces valuable water resources, and leaves behind a toxic trail of wastewater in the local environment. It takes approximately 500,000 gallons of water to produce one ton of lithium. When mining companies head into countries like Chile, they use up a majority of the region’s water, unjustly affecting small communities.

According to the Institute of Energy Research, Chile’s Salar de Atacama is one of the driest places on Earth, yet the mining companies are allowed to use up 65% of the region’s water. After the brine is removed from the salt flats, the water table automatically falls, disrupting the natural flow of water that is needed for wells and agriculture. These large-scale disruptions can always be blamed on “climate change” as the lithium mining industry plunges ahead, with no regard for the environmental damage wrought in its wake.

The toxic chemicals that are used to extract the brine are ultimately discarded into the local environment, where they contaminate streams, crops, wildlife and local ecosystems. The toxic chemicals, which include hydrochloric acid, leak from the evaporation pools and pollute the nearby water supply. Additionally, the large open pit mines displace arsenic into the nearby streams and rivers, where it will eventually deposit into agricultural land and be taken up by the crops. This downstream pollution is dangerous to wildlife, too. For example, in May of 2016, the Liqi River was polluted by the Gangizhou Rongda Lithium mine. The river turned up with dead fish, yak and cows.

The lithium mining operation in Salar de Atacama displaces more than 1,700 liters of lithium-rich brine every second of operation. This causes the lakes to shrink, killing off local flamingo populations that depend on the basin to eat and breed. In Argentina, lithium mining caused noticeable contamination of nearby streams that were used to feed livestock and irrigate crops. The residents of Salar de Hombre Muerto noticed that the groundwater flow had changed, causing water resources to disappear. They also noticed that that freshwater was contaminated with salty brine, destabilizing the local ecosystems and negatively affecting bird migration and llama populations — which the indigenous communities depend upon for economic survival.

“Like any mining process, it is invasive, it scars the landscape, it destroys the water table and it pollutes the earth and the local wells,” said Guillermo Gonzales, who spoke about the issues with lithium from the University of Chile back in 2009. “This isn’t a green solution – it’s not a solution at all.”