LIVE-STREAM-VIDEO: TPUSA To Host “Defeating The Great Reset” Event In Phoenix, AZ – Set To Expose The Evil Globalist Agenda And Educate Citizens On The Horrors Of The Great Reset On September 16 & 17 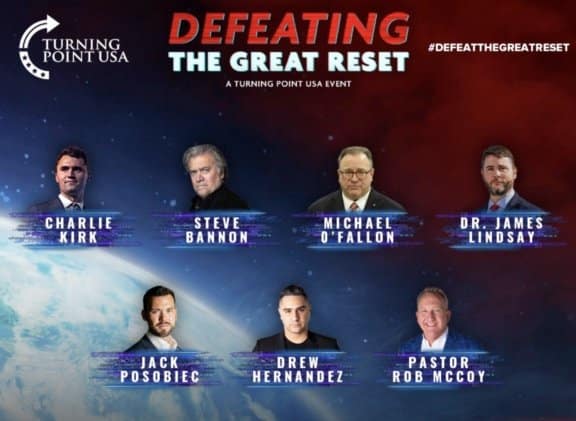 Turning Point USA (TPUSA) is set to host its “Defeating The Great Reset” Event in Phoenix, Arizona, on Friday and Saturday with the goal of educating citizens on the totalitarian priorities of the World Economic Forum and the New World Order.

According to TPUSA, “Turning Point USA is a 501(c)3 non-profit organization founded in 2012 by Charlie Kirk. The organization’s mission is to identify, educate, train, and organize students to promote the principles of freedom, free markets, and limited government.”

The new event is set to expose the globalist agenda and rally to stop the Great Reset and the 2030 agenda from destroying our world as we know it.”

Video coverage of the event can be found below.

TRENDING: THAT WAS QUICK: Buses Arrive at Martha’s Vineyard and DEPORT Illegals Off the Island (VIDEO)

TPUSA provided a preliminary agenda for the event with great speakers and subject matter experts to The Gateway Pundit.

Jack Posobiec recently told Steve Bannon why he is flying all the way from Tel Aviv, Israel, for this historic event In Phoenix. Poso and Bannon are key speakers at the event today and tomorrow.

Bannon: How important is this conference we’re going to have?

Posobiec: Well, the conference, getting there for me is going to be a little trickier than most because I’m going to be flying directly from Tel Aviv all the way to Phoenix just for this conference because that’s how important it is. I’m flying a quarter of the way around the world just to be there to be on that stage. Not only, Steve, with yourself, but with Charlie, Dr. James Lindsay. Obviously, we can’t divulge yet who this secret guest is going to be, but if folks go to TPUSA.com/reset, we’ll be at the Arizona Grand in Phoenix. And people need to understand, we have them on the ropes. It may not seem like that, but we actually do. That’s why they’re lashing out. That’s why they’re becoming desperate. That’s why they’ve gone mask off. That’s why they’re swinging the hammer down. If the situation were helpless, the propaganda would not be necessary. The heavy-handed tactics would not be necessary. We are gaining traction around the world. It’s going to start right there in Phoenix. It’s going to go across Europe first. It’s going to go across Canada, and then it’s going to come into every single one of the 50 states and every precinct in every state. We’ve named exactly what it is, this globalist agenda that they said back in the 90s. Remember it was a conspiracy, it was tinfoil, black helicopters, now that come out today and they’re in your grill about it. We’re going to come together, and we’re gonna fight back.

I’m going to be releasing, by the way, when I was in Davos when Klaus Schwab sent his thugs after me in Davos, we were filming a documentary. We’re dropping episode one at the conference.

Previously, Posobiec shared the following trailer featuring globalist Klaus Schwab and himself for the NEW “Great Global Reset” docuseries, which is set to air Saturday in Phoenix. The globalist elites are so terrified of this that they censored the trailer on Twitter for “potentially sensitive content.”

In a statement to The Post Millennial, Posobiec said, “Twitter is censoring the trailer to our Great Reset series for the same reason Klaus Schwab sent thugs with guns and uniforms after me in Davos. They are terrified of how much Turning Point is exposing them, and they have no other response than to swing the hammer down. The problem for them, is that our leader is a carpenter.”

DO NOT SHARE THIS or it will make Klaus Schwab very upset! https://t.co/nLNIKyGGRi pic.twitter.com/uxxmK5zmJX

Earlier today, Posobiec announced that My Pillow founder and CEO Mike Lindell, whose rights were recently attacked by FBI agents, will also be in Phoenix today for the event! Lindell has been one of the most influential figures in taking our Country back from the wicked globalist elites. Because of this, the Stasi FBI seized his phone on Tuesday.

September 16-17, 2022 Turning Point USA will be hosting the newest event in the movement, Defeating the Great Reset.

Join Charlie Kirk, Steve Bannon, Jack Posobiec, Drew Hernandez, and many more as we rally to prevent this malicious plan from destroying America.

Coined by the WEF (World Economic Forum) the Great Reset it is a political, social, economic, and environmental plan to entirely “reimagine” the priorities of society. The ideology implementation has sparked massive protests throughout Europe for limiting energy independence, shutting down farming operations, and limiting private ownership. The WEF aims to “implement long-overdue reforms that promote more equitable outcomes,” and most notoriously, they want people by 2030 to, “own nothing and be happy.”

The World Economic Forum’s “Great Reset” poses one of the most dangerous threats to individual freedom, national sovereignty, divinely-ordained rights, and free enterprise that the world has ever seen. The Great Reset must be stopped—and Turning Point USA is leading the charge.

Every speaker has stood bravely against the radical left’s push to globalize America and forfeit her greatness, sovereignty, and even her freedoms — and they are here to inspire, educate, and empower you to stand alongside them!

The event will be live streamed on Real America’s Voice’s Rumble page.

Youtube would likely try to censor the event. Thank God for Rumble!

The speakers will begin at 6 pm MST.