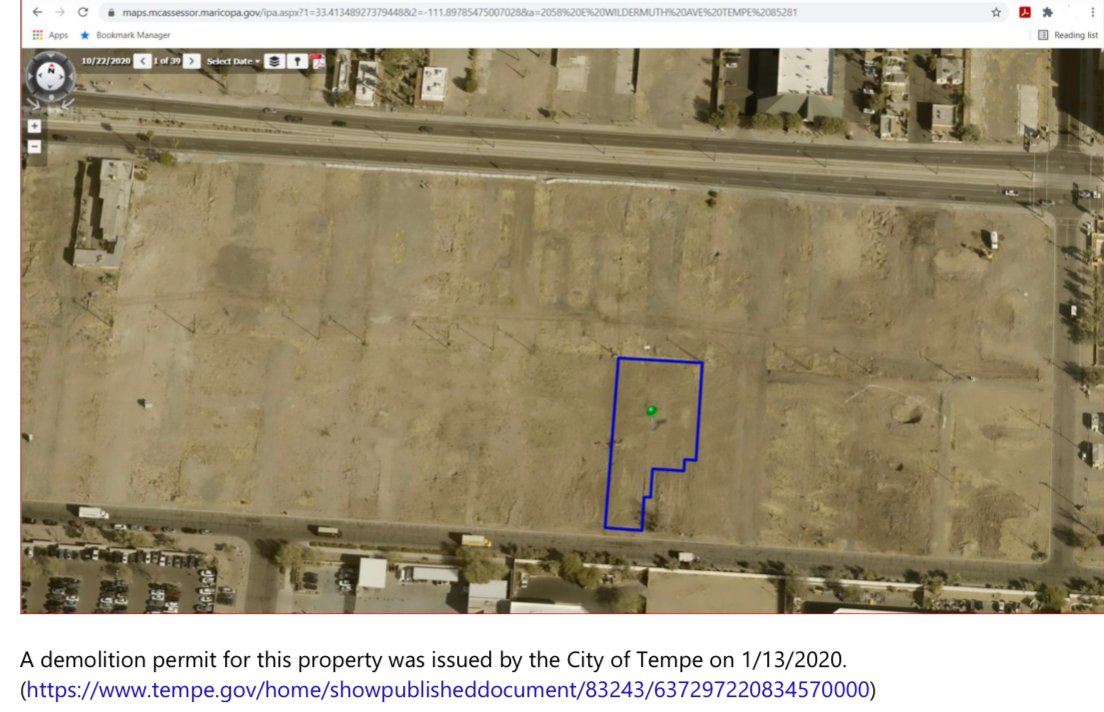 After knocking on the doors of tens of thousands of registered voters, citizen volunteers discovered that many people cast ballots that weren’t counted (lost votes) and many others did not cast a ballot but had a vote counted in their name (ghost votes).

Maricopa County immediately attempted to discredit the findings and the team of volunteers.

In this report, the Maricopa County Recorder Stephen Richer and the County Assessor Eddie Cook claimed that the address at 2058 E. Wildermuth Ave. in Tempe was not a vacant lot.

They used a five-year-old photo of the lot, when it had homes on it, to say “This property was a mobile home property through 2020″.

They failed to mention that the property was demolished prior to October 22, 2020, and the 2020 election.

Harris obtained images from the Maricopa County Assessor’s page dated October 22, 2020, which prove that the County is spewing falsehoods.

The demolition permit for this property was issued on 1/13/2020.

Harris: Additional photographic evidence, eyewitness testimony and public records confirm that the mobile home park owners sold this property on February 19, 2020, to an investment/development company and the property along with all the surrounding structures were subsequently completely leveled in the first half of 2020.

Why did the County Recorder and Assessor intentionally choose an image from more than 5 years ago to discredit our report?

Cook: this address was a legitimate address to receive mail before ownership changed in 2021.

The image above proves that this statement is completely false.

Cook: Again, I met with the County Recorders office to verify this voter. The voter registered in 2016. Then in 2019 this voter moved and request his all his mail including his ballot be forward to another address. This is allowed by State Law.

Assessor cook now claims that the ballot was legally forwarded to this voter after he moved from this address in 2019.

In case you are not aware: Per law (A.R.S. 16-558.01), official election materials, such as ballots CANNOT be forwarded.

5. Will my ballot be sent to my forwarding address on file with the Post Office?

No. As required by law, all official election materials, such as ballots, are marked “Do Not Forward – Return Service Requested”. If the early ballot is returned to us indicating you are no longer at the residential address on file or that a forwarding order is on file, this will then begin the process of deactivating your voter

Why are the Maricopa County Recorder and Assessor stating that the former resident’s ballot was forwarded when A.R.S. 16-558.01 states official ballots are NONFORWARDABLE?

The two officials flip-flopped their story in their joint official statement, saying “The “ghost vote” in question by this report turned out to be a former resident of the mobile home park and requested their ballot at a temporary address.”

This resident moved away permanently from 2058 E. Wildermuth Ave. and a demo permit was issued by the City of Tempe on January 13, 2020.

County Recorder Richer and Assessor Cook also acknowledged on social media that this voter permanently moved from this address in 2019.

Although Recorder Richer and Assessor Cook now assert that the former resident requested a “temporarily away” address 330+ days before ballots were to be mailed out, the County’s EV32 official record of all sent ballots for the 2020 General Election indicate that on 10/23/2020, a ballot bearing the name of the former resident (VoterID 4830013) was mailed to the vacant lot at 2058 E Wildermuth Ave Tempe. As you can see from the picture taken directly from the County Assessors website, dated 10/22/2020, this address, along with all the surrounding lots were completely leveled in preparation for the Eastline Village Culdesac mixed use complex under development. It is clear from the photo dated 10/22/2020 that the residence and its mailbox were no longer there for a ballot mailed on 10/23/30 to be received.

County records confirm a General Election 2020 ballot for the former resident was mailed to the vacant lot.

The County recorded the mail-in ballot for the above address and VoterID 4830013 as being received back by the Elections Department on 11/01/2020, nine days later. This return receipt is officially recorded by the County in its EV33 files which are an official record of returned ballots. A mail in vote from this address is in the Final Voted VM55 file.

County records confirm a ballot for the former resident was returned from the vacant lot.

Who cast the vote from the vacant lot?

It is deeply troubling that Maricopa County Recorder Stephen Richer and Assessor Eddie Cook responded to our Grassroots Canvass Report with false information in an apparent attempt to mislead the public. Except for speaking with eyewitnesses, all the information we gathered was from researching Maricopa County and city public records. Through publicly available photographic documentation, public records, and eyewitness testimony the following is clear:

To aid the canvassing efforts visit Canvass50.org and participate in the virtual canvass.

The Arizona audit report will be released to the public next Friday, September 24. All criminal wrongdoing will be referred to Arizona Attorney General Mark Brnovich who may open a criminal investigation.

We will know soon what the County is hiding.