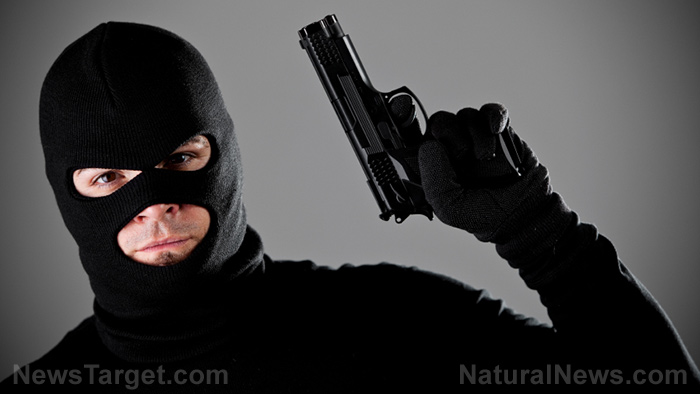 (Natural News)
While alerting city residents of a disturbing trend involving follow-home robberies, the Los Angeles Police Department has raised a lot of eyebrows by telling people to “cooperate and comply” when they are being robbed.

In follow-home robberies, suspects locate victims and then follow them and rob them as they arrive home or at their workplace. Victims are being followed from places such as Los Angeles’s jewelry district, upscale shopping area Melrose Avenue, high-end restaurants and nightclubs.

Violent crime has been rising throughout the country in general, but the Melrose area is currently outpacing other parts of Los Angeles, with a 75 percent rise in robberies with guns recorded this year through September in the Wilshire and Hollywood divisions. The robbers often target expensive purses and jewelry such as necklaces and watches. They are also targeting victims based on the type of car they drive.

In response, the LAPD recently tweeted recommendations for members of the community. These include common-sense advice like being aware of your surroundings and looking for anything that seems unusual before you get out of your car or leave a restaurant, business or club. They also advise citizens to be cautious when displaying luxury goods in public, such as jewelry, watches and purses.

Their suggestions also included recording and reporting any suspicious activity and calling 911 if people believe that they are being followed.

“Be a good witness”

They also wrote: “If you are being robbed, do not resist the robbery suspects; cooperate and comply with their demands. Be a good witness.”

Of course, many Californians have little choice in the matter because the state has some of the strongest gun control measures in the nation. They have had universal background checks and a ban on assault weapons in place since the 1990s. They also limit the number of guns that law-abiding citizens are allowed to buy each month and require them to show “good cause” before they can be approved for a concealed carry permit. California has also banned grade school teachers from carrying guns for classroom defense as well as campus carry for students who wish to defend themselves.

In addition, California has strict gun registration requirements, a ban on high-capacity magazines, a red flag law and a waiting period on gun purchases of 10 days. Meanwhile, its ammunition controls include background checks for buying ammo.

As a result, many Californians find it a lot harder to defend themselves from violent crimes than people in states with looser restrictions. And despite all of these controls, violent crime there continues to rise.

Their announcement might be well-meaning, but there are concerns that the LAPD has essentially given criminals a free pass to rob people by instructing everyone not to fight back. In addition, by telling people to be “a good witness,” robbers might be more inclined to kill their victims so they can’t report them to the police.

We are also seeing a similar attitude being adopted in San Francisco, which has become, in the words of one Wall Street Journal writer, “a shoplifter’s paradise” as thefts under $950 have been effectively decriminalized there. Walgreens has been forced to close ten stores there due to the spike in organized retail crime, with brazen thieves walking out the door with armfuls of goods in full view of helpless workers.

California is not the only place that is noting a rise in violent crime. New York City, Seattle, Boston, Portland, St. Louis and Chicago are also noting rises in crimes like muggings, shoplifting and vehicle break-ins.