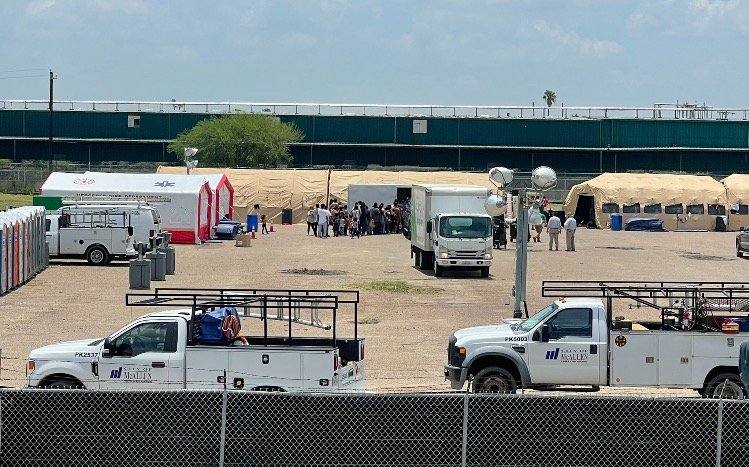 The city of McAllen told Fox News that the federal government is releasing “an alarming number of immigrants into McAllen, and that the feds aren’t testing them for COVID.”

Fox News reporter Bill Melugin has been reporting live from the US-Mexico border in Texas and provided photos of the emergency shelters.

BREAKING: The city of McAllen has started constructing emergency shelters for illegal immigrants released by Border Patrol. The city says the federal government is releasing “an alarming number of immigrants into McAllen, and that the feds aren’t testing them for COVID. @FoxNews pic.twitter.com/hy9TbKtgCM

Illegal aliens have been pouring over the border in record numbers since Joe Biden was installed in January.

Illegal immigration is at a 21-year high.

Many of the illegal aliens are infected with Covid, chicken pox and other diseases.

Busloads of illegals were dropped off in McAllen this week.

According to the City of McAllen, “the federal government has released over 7,000 COVID positive migrants into their city since February, including over 1,500 new infected migrants in just the *last week alone*. A local state of disaster in McAllen has been declared.” Fox News reported.

The illegals arrived to the emergency shelters in McAllen Wednesday afternoon.

Migrants are beginning to arrive at the emergency tent shelters the city of McAllen constructed overnight. The city says the Feds have been releasing an “alarming” number of migrants into their city, untested for COVID, & leaving hundreds stranded on the streets. @FoxNews pic.twitter.com/OrL1FQxPLf