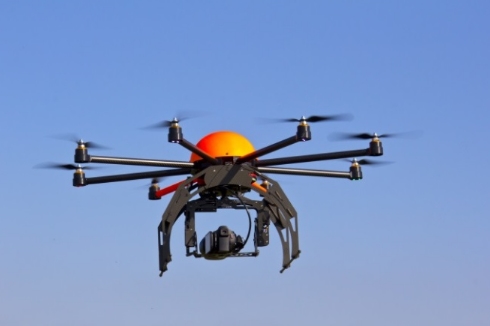 (Natural News)
Law enforcement officers have been fighting Mexican cartels wanting to smuggle drugs into the U.S. In turn, the cartels have devised a number of ways to outsmart authorities in the U.S. and Mexico. But the war on drugs has now taken a different turn as cartels utilized drones for both surveillance and offensive purposes.

An incident just over a month ago in Mexico’s Michoacan state showed the cartels’ use of weaponized drones for nefarious reasons.

State law enforcement officers were clearing blockades placed by feuding cartels along the highway in the town of El Aguaje as part of a routine operation when a drone suddenly flew over police officers and dropped a gunpowder bomb, wounding two in the arms and legs.

Mexican officials said they believe the Jalisco New Generation Cartel (CJNG) was responsible for the April 20 attack. The CJNG had upgraded its arsenal by including weaponized drones to fight its adversaries. But not to be outdone was its main rival Carteles Unidos (CU), which also tapped drones in its war against the larger CJNG.

Mexican Defense Secretary Luis Cresencio Sandoval also pointed his fingers at CJNG for the incident. He added that the person who used the drone against Michoacan law enforcement was arrested. During a briefing in Mexico City, the secretary acknowledged that such attacks were concerning – but “haven’t been as effective” as the cartels would like.

Sandoval noted that the drones used by cartels cannot carry sufficient explosives to seriously injure a person or destroy a building.

Speaking to the Courier-Journal, one anonymous CU drone operator said his group has about 100 drones. He added that a man nicknamed “Lord of the Skies” had been training other CU members since last year. The operator said: “We have many drone models. They’re not sophisticated – but [they] can carry a considerable amount of explosives.”

According to the operator, CU deploys drones to surveil its territory and attack CJNG members. Despite the drones’ capability to deliver items, he remarked that both cartels do not use drones to transport drugs because of their inefficiency. The operator continued that the drones they use “come legally from the U.S. [through] groups in Michoacan that support [CU] and have [legitimate] money to buy the drones.”

Drugs and drones are definitely a bad combination

The incident in El Aguaje was not the first attack linked to CJNG. It has been accused of conducting many such offensives in the city of Tepalcatepec in Michoacan. CJNG has also been blamed for an attack in Baja California that targeted the residence of the state’s Public Safety Secretary Gerardo Manuel Sosa Olachea. (Related: UN report: Killer AI drones with no remote pilot hunted down humans.)

El Aguaje is located within the Aguililla municipality, which CJNG considers as its territory. The municipality is where CJNG leader Nemesio Oseguera Cervantes – also known as “El Mencho” – was born. Cervantes is suspected of being Mexico’s most powerful drug lord. Outside its links to CJNG, Aguililla has also become a strategic hub for methamphetamine production.

Aside from methamphetamine, CJNG is also blamed for the spread of other drugs such as fentanyl and heroin to the U.S. According to the 2020 National Drug Threat Assessment by the Drug Enforcement Agency (DEA), the Cervantes-led cartel and its rivals produce fentanyl in clandestine laboratories. The DEA report added that they also produce and traffic “the overwhelming majority of the heroin” available in the U.S. (Related: Mexican drug cartel labs are smuggling mass quantities of meth into America.)

The use of drones by cartels such as CJNG and CU is part of their larger strategy to arm themselves like rogue militaries. Because of this, experts in both the U.S. and Mexico worry that more militarized cartels will translate to more casualties, more drugs entering the U.S. and a harder battle for law enforcement.

Former DEA Special Operations Division Agent Derek Maltz told the Courier-Journal: “I’ve been a strong advocate of designating the Mexican cartels as terrorist groups because they’re acting like [them] and they’re equipped like [them.] They’re distributing record levels of poisonous drugs in America.”

The erstwhile DEA agent added that the cartels will “use the latest and greatest technology” to defeat their foes in Mexico, go after police officers and fight for territory and better routes to smuggle drugs into the U.S.

“They’re killing our citizens as we’ve never seen in the history of the country,” Maltz said.

Data from the Centers for Disease Control and Prevention supported Maltz’s remarks. The public health agency said more than 81,000 people in the U.S. died from drug overdoses in the 12-month period ending May 2020. It added that this was the highest number of overdose fatalities ever recorded in a 12-month period.