By Jim Hoft
Published November 18, 2020 at 3:11pm
Here is something an anonymous friend put together this morning.

The 2020 turnout numbers are still not official but they are significant.
The high numbers from Wikipedia were used in this study.

The data was put in Excel and then calculated for the average and for standard deviations.

Therefore, this was either the most politically hyped election the country has ever had, which is unlikely, or there was an enormous amount of fraud.

That is to say, statistically speaking, we have 99.7% certainty on the November 2 that turnout would be between the two dashed green lines.

But it wasn’t.
And not only had this NEVER happened before in US history, but we have also NEVER been outside 2 standard deviations before! 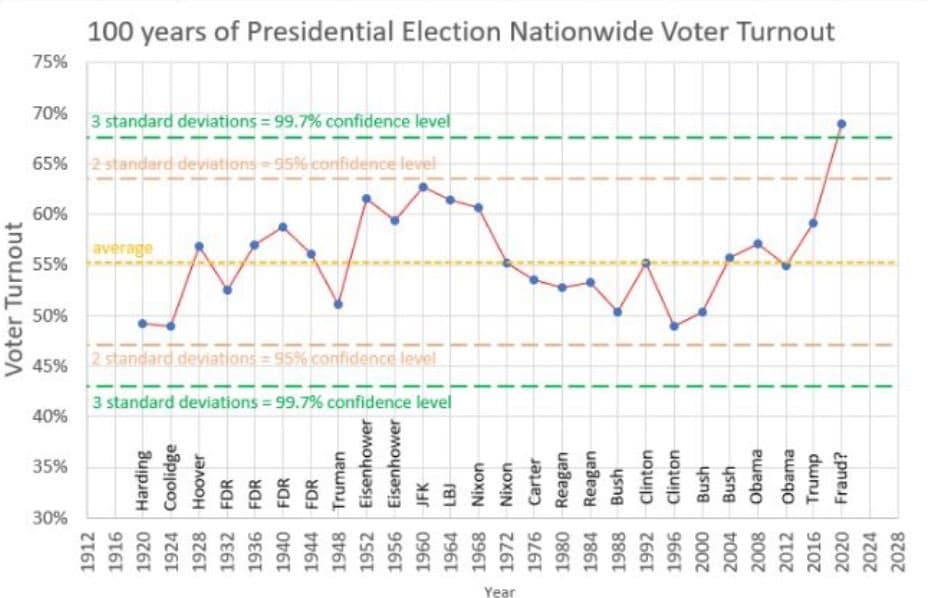 Look at the voter turnout for Barack Obama. It was above average. But Basement Joe HIT IT OUT OF THE PARK!

Voter turnout was driven entirely by:
a.) The left’s extreme hatred of Donald Trump. The hatred exceeds anything we’ve ever seen before.
b.) Voter turnout is skewed upward because of fraud. The left needed enormous turnout numbers to steal the election for Basement Joe.

We all know Joe Biden was not memorable, he had little support, he couldn’t fill a parking lot at his so-called election speech. Biden basically “called in” his campaign.

Trump enthusiasm was ENORMOUS! Never in recent history has their been such strong support for a sitting president!

Another way of putting it:

You can only expect to be outside of 3 Sigma, .3% of the timeThat means 3 times in ever 1,000 elections or roughly once ever 1,333 years! And since half of those occurrences will be for low turnout, we can expect a high turnout election to exceed 3 Sigma roughly once ever 2,666 years.