Just this once, when the Mainstream Media debunked the notion that Nancy Pelosi had been arrested on January 12th, they made some good points.

But things have changed since then and I do believe, yes I do believe, that all the details of the last two weeks indicate that The Nancy has been arrested and released under 24/7 guard pending trial. The visual evidence is pretty compelling.

Our story begins on Wednesday, January 6th. That was the day the FBI released information that Annunciata (aka Nancy) Pelosi’s father was Mafia and her brother a pedophile and rapist.

January 6th was also the day undercover Special Ops reportedly used the Antifa drama at the Capitol to do a quick snatch-and-grab of computers belonging to certain politicians,  including Nancy Pelosi, while Capitol Police were ordered to stand down, even co-operate.

Before any information about the contents of her laptop could be released, the Mainstream Media was already scrambling to spin a yet nonexistent story. For a laptop that Pelosi innocently used “only for presentations,” they certainly freaked out.

My favorite spin was their prophecy that the Right would undoubtedly plant fake news stories about the contents of the laptop. Then the MSM went full on paranoiac claiming that a woman was attempting to sell the laptop to….wait for it…Russia, Russia, Russia.

Just once could you try to be original, MSM!?!

It’s perfectly normal for the Speaker to appoint a #2 but exceedingly abnormal for Nancy and her enormous ego to miss presiding over the House of Representatives on January 11th when, according to  Congressional Record Vol. 167, No. 6, “A resolution impeaching Donald John Trump, President of the United States, for high crimes and misdemeanors” was introduced.

This was a glorious moment for her! She was going to make history on January 11th as the first Speaker of the House in our nation’s history to bring Articles of Impeachment against the same President twice during his tenure…and she missed it.

If Nancy could’ve crawled or rolled, she would’ve been in the House on January 11th unless she’s no longer mistress of her own fate.

Of course, the Mainstream Media ignored the obvious and went gaga over Pelosi’s “Impeachment Dress.” Yeah, whatever. She wore the same LBD at the last Impeachment. Get over it!

Do you suppose the MSM is obsessing on her simple black dress to distract us from the other women captured in the photos below? Grim-faced, gray pant-suited women wearing Capitol Police pins on their lapels and Capitol Police badges on their belts.

Eagle-eyed patriots instantly cried, “She’s arrested” and the MSM was just as quick to debunk their claims.

On the one hand, the MSM was correct when they pointed out that one of the women, who often has her hand partially hidden in her jacket, has been photographed with Pelosi going back to at least 2018. They are also correct that Capitol Police do provide security details for the Senior Members of Congress.

But the MSM is gleefully ignoring all the oh-so-subtle changes in Nancy’s security detail.

For starters, in the past she was surrounded by mostly male officers. Suddenly, they’re mostly women and they accompany her almost all the way to her podium, even during safe scenarios such as Press Conferences and the January 13th Impeachment Signing.

I’m told that when a criminal is awaiting trial and considered a flight risk, they are kept under 24/7 guard by officers of the same gender. The criminal loses all their privacy, including in the bathroom.

Where before January 8th, Nancy’s security enveloped her like an invisible cloud but didn’t interact with her, that’s all changed. Now they’re calling the shots, directing her, giving her orders.

Nowhere is that more blatant than at Joe’s phony pre-filmed Inauguration movie released on January 20th.

Of all the famous people acting oddly at Joe’s Phony Inauguration (and all of them were!), no one was more glaringly out-of-character than Nancy Pelosi.We can all agree she’s a fame whore, right?

But every time she glimpsed the cameraman coming towards her in the Capitol, she turned her back. What were we not supposed to see? Red, swollen eyes from weeping? She seems to be weeping a lot these days, even during press conferences.

Later, when Nancy finally consented to be filmed following Joe and Jill into the Capitol building, her huge sunglasses covered the top half of her face while her bespoke mask was hiked up to her bottom eyelashes.

But this is where it gets extremely interesting.

As Nancy follows Biden into the Capitol, her blonde guard converged on her and is clearly heard ordering Nancy, “Don’t say nothing.” No one debates that. It’s clear as a bell.

Nancy’s response is fascinating. Remember, this is the woman who physically charged at another Representative on the floor of the House as he spoke truth inconvenient to her.

Yet we hear her obediently promising, “I won’t” and submissively following the aggressive hand gesture of the other officer.

That was it for me. I don’t need any more evidence to be convinced that Nancy Pelosi has indeed been arrested, is under 24/7 guard pending her trial by a military tribunal and, until then, is being forced to play the Regular Loathsome Nancy role in the public eye.

At an age when most women would be happily baking cookies, playing with their grandchildren and working the Times crossword puzzle, that must be a special kind of Hell both for in-charge Nancy and her long-suffering guards.

“Why?” you ask. “Why allow criminals to carry on with business as usual?”Because President Trump, who is no danger of impeachment as you cannot legally impeach a private citizen, doesn’t want to start a panic, a stampede for the border by the other criminals. He needs them to be lulled back into a false sense of complacency. But just in case, the military has barricaded all the tunnels under Washington D. C. and there are checkpoints for everyone going in and out.

Who ever said draining the swamp would be dramatic and flashy wasn’t thinking strategically. Better to pick ’em off, one at a time in silence and secrecy, so the others don’t get spooked and scatter like a flock of turkeys. President Trump’s intention is not merely to convict a few congressmen. No! His intention is to drain the Global swamp.

Remember after President Trump won in 2016? HRC suddenly was limping around wearing a boot. “Das boot” as it’s laughingly called on Twitter. The same exact thing happened to Joe Biden. Sprain, my a$$! He was clearly seen putting his whole weight on his supposedly sprained ankle!

It may not satisfy the MAGA crowd who are baying for a bloody, dramatic Draining of the Swamp in one fell swoop but I trust President Trump’s ability to chart and plan a perfect strategy. He’s the billionaire. I’m not. I bow to his superior intellect.

The case for Pelosi being under arrest seems very compelling to me. It’s a pleasure to finally see her humbled. 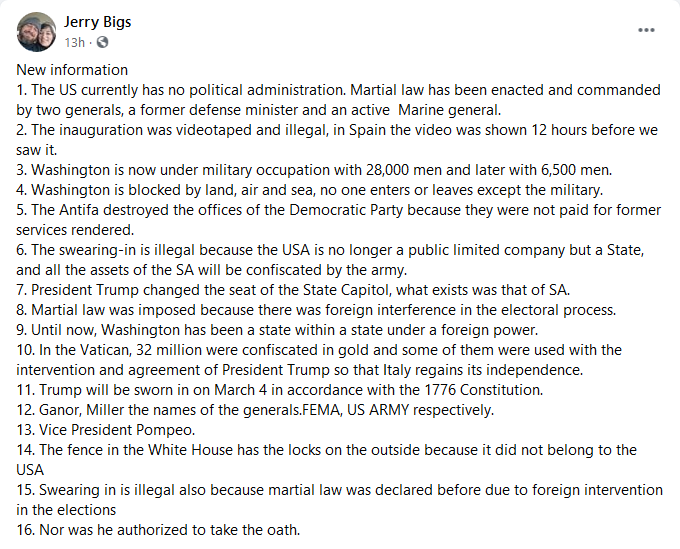