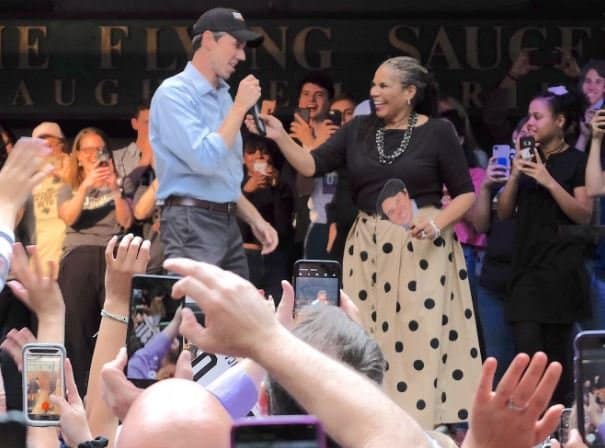 The goal posts continue to move.  For two years, conservatives and others who questioned the 2020 election have been ostracized on social media platforms and in a majority of the Mockingbird Media outlets across the nation.  They bring in some “expert” who refutes a claim and fades away.  They rarely, if ever, answer any questions or follow up with any sort of conversation regarding their opinions.

Democrats “who cry wolf” have hit an all-time low.  The Democratic Party of Tarrant County has issued a response to The Gateway Pundit’s exposé from last week.  To call the TCDP’s response  “laughable” would be the “understatement of the year” in any year other than this dumpster fire that is 2022.

If you have not yet seen the police body cam footage referenced here, check out this “unauthenticated” video.

TRENDING: Biden’s FBI Sends 25-30 Agents to Home of Pro-Life Author and Father of 7 – Arrest Him for Reportedly Protecting His Son from an Abortion Escort

This was an explosive report and the Tarrant County Democratic Party did not respond to the raw footage – until now.

They played the race card.

The TCDP hit on every mainstream Democrat argument in their playbook.  They imply Republicans are racists.  They mention “baseless” claims and deflect to yet another debunked claim having to do with racism:  they mention Lesa Pamplin, an actual racist who promulgated the debunked lie that a Brigham Young University student or fan at a volleyball game called her goddaughter the “n” word every time she served for the Duke Blue Devils.  This “racist heckling” was thoroughly debunked by many news outlets, most notably CNN.

The Democratic Party of Tarrant Co would have you outraged over a “woman of color” being accused of orchestrating a ballot harvesting ring with her associate, Stuart Clegg, the executive director of the TCDP at the time.  The problem is Clegg has been implicated in this previously by four women of color and a homeless man of color.  Pot: meet Kettle.  I guess it’s ok for an elitist “woman of color” to take advantage of “plebs of color” and the homeless, though.  Rather than calling for an investigation, they gaslight that the police body cam footage is “unauthenticated” and “baseless” despite testimony and statements from two unrelated cases that implicate Clegg in this harvesting ring.  “It’s the Republicans!” they cry.

According to the notice, Sanchez distributed payments “from funds received from Stuart Clegg” to more than four women for  “activities” such as “fraudulent altering (mail-in) applications and submitting them again by fax.”

“There was no conspiracy to defraud any election,” Clegg told the Star-Telegram last week. He claimed that while a consultant he had hired canvassers over the years to “work legally in Texas elections,” and insisted that his workers were trained to follow the law.

Reportedly, Clegg received money from campaigns and used it to pay the workers.

“We’ve trained them to follow the law and instruct them as best as we can but, like anything, we’re not with the actual worker the whole time,” he said. “I don’t believe the allegations the attorney general is making.”

I wonder if any Democrats in the TCDP or law enforcement agencies in the area have the guts to investigate this the way Clegg alleges he would.
Democracy Docket shared the following filing that mentions Clegg and the Sanchez case on APPX 24 and 25:

Furthermore, the former Tarrant Co. Democratic Party Executive Director Stuart Clegg, implicated above as well as in the body cam footage, is apparently a staunch advocate for “homeless counting teams” according to social media posts shared on Kanekoa’s recent substack:

Despite the above circumstances, the body cam footage implicating Deborah Peoples and Stuart Clegg, and the #2000Mules evidence across the country, the Tarrant County Democratic Party abandons all morals and ethics and doubles down:

“An unauthenticated video is being spread by local Republicans with wild claims hoping to distract from an outstanding candidate, Deborah Peoples for County Judge.  Republicans believe these baseless allegations against a woman of color…”

Call them racist and deflect? Check.

The body cam footage was obtained through open records records.  You may request them yourselves to validate this if you don’t trust your eyes.  The event occurred on January 3, 2020 at around 6:20:00 Zulu time.  Reference: X83040699 in your request.  The Mockingbird News will not report on this.  See for yourself.