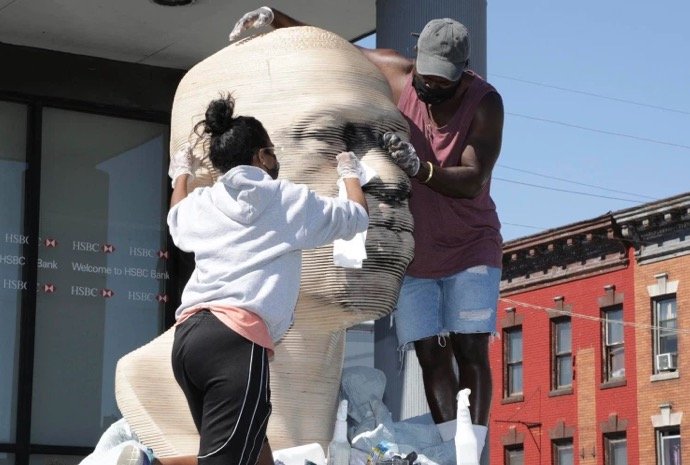 The NYPD Hate Crime Task Force has deployed a team to investigate the vandalism of a George Floyd statue in Brooklyn.

Murder and violent crime have skyrocketed in New York City, but law enforcement has sent out the cavalry to find the people who spray-painted the statue.

TRENDING: EXPLOSIVE REPORT! WE CAUGHT THEM AGAIN: New Findings Show Coordination and Collusion Between PA and GA in 2020 Election Steal

The East Flatbush statue, which was unveiled last week during a Juneteenth celebration, was defaced at about 4 a.m. Thursday.

The phrase “Patriot Front” — a white nationalist hate group — was painted over the inscription, police said.

Black spray paint was also smeared across the sculpture.

The NYPD Hate Crime Task Force is investigating the vandalism.

A Newark police sergeant noticed the statue had been defaced with graffiti.

“The face of the statue was also painted black, and there were white words painted on its torso that referred to the Patriot Front, a group that Southern Law Poverty Center has identified as white supremacist extremists.” NJ.com reported.

“The defacing of the statue of George Floyd has been a trend around the country,” Newark Mayor Ras J. Baraka said in a statement. “This horrible act is the very reason that this statue needs to remain and be upheld. As this is not just about George Floyd, it’s a deliberate effort to push back against and ultimately dismantle systems of hatred, racism, and white supremacy. We celebrate those efforts in Newark, and will continue to do so, despite the ignorance that has reared its ugly head.”