Ottawa Police Team Up With Federal Intelligence Agencies, Including US DHS and FBI, to Launch “Enhanced Intelligence Operations and Investigations” Against Truckers For Freedom Convoy 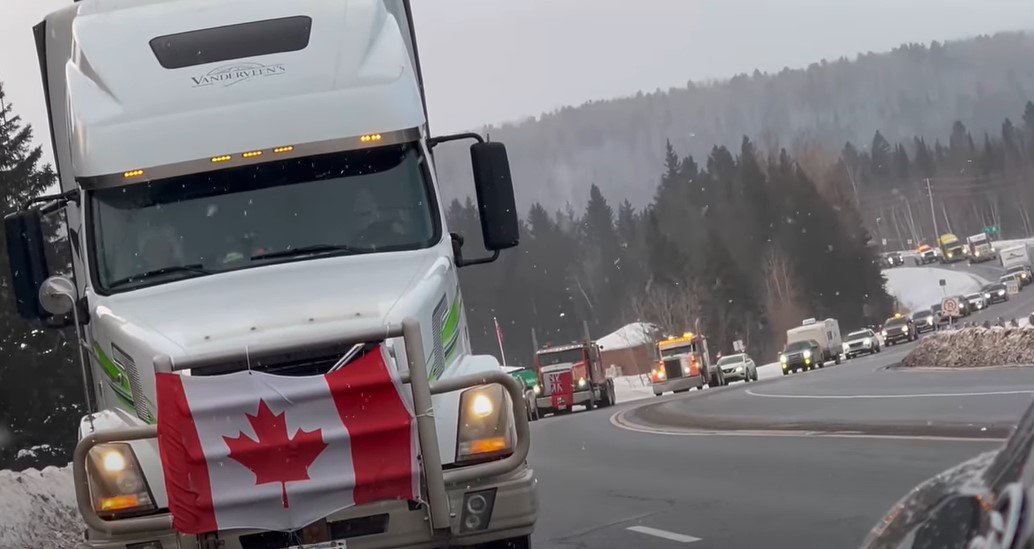 Thousands of trucks have gridlocked the Canadian capital city of Ottawa for almost a week, with protesters aiming to pressure Canadian Prime Minister Justin Trudeau to end all mandates and lockdowns associated with Covid-19. Participants are refusing to leave until the authoritarian restrictions are lifted completely, and with both sides not budging, the Canadian government is turning to drastic measures in an attempt to crush the grassroots uprising.

On Friday, the Ottawa Police Service (OPS) announced they are pairing with several federal intelligence agencies and other law enforcement divisions to launch “enhanced intelligence operations and investigations” that will target individuals who are participating in the Canadian Truckers For Freedom Convoy.

US law enforcement agencies, including the Federal Bureau of Investigation (FBI) and Department of Homeland Security (DHS), will also assist with the crackdown by investigating “online threats that originated in the US,” despite little to no evidence or behavior that has indicated any violence is being planned.

According to the OPS statement, the ‘enhanced investigation’ will begin targeting the key figures who are behind the organization of the convoy as part of the Canadian government’s “increased effort to identify and target protestors who are funding/supporting/enabling unlawful and harmful activity by protesters.”

Intelligence agencies will be assisting the OPS in gathering identifying information on targeted individuals, including financial records, digital history, vehicle registration, driver’s licenses, insurance status, and other personal data that can be used to criminally prosecute the convoy participants.

Ottawa Police Chief Peter Sloly provided details on the investigation during a press conference on Friday.

NEW: Ottawa Police Chief Provides Update On How Law Enforcement Is Identifying & Targeting Protestors & Supporters of Protestors Who Fund Them For Prosecution… pic.twitter.com/kl4x9Rxfti

The OPS announcement also makes clear that “every unlawful act, including traffic violations, will be fully pursued regardless of origin.” It continues by specifying some of the ‘unlawful acts’ that will be criminally prosecuted – such as, “harassment, mischief, hate crimes, and noise violations.”

We know that additional demonstrators are coming, and we are significantly increasing our policing resources to respond. /3

According to Canada Globe and Mail reporter Marieke Walsh, the Royal Canadian Mounted Police, Ontario Police, and the Sûreté Du Quebec, are all working on the operation with additional assistance from US Federal agencies.

Homeland Security and the FBI are also helping with an investigation into online threats that originated from the U.S.

The authoritarian crackdown preempts the arrival of thousands more protesters who are expected to join the protest in Ottawa over the weekend. In addition to the enhanced investigation, the OPS will deploy 150 additional uniformed and undercover officers to patrol the streets, while also “expanding and hardening” the police perimeter that surrounds the protest’s “red zone.”

Per an OPS press release:

“Expand and harden perimeter of the demonstration red zone: The Ottawa Police Service and City of Ottawa will be utilizing concrete and heavy equipment barricades to create no-access roadways throughout the downtown core. The City of Ottawa will be releasing a map of impacted roads later today. Protestor vehicles will be directed to designated parking zones outside of the downtown core. Illegal parking by demonstrators will result in by-law enforcement, removal and impound. If necessary, interprovincial bridges, highway off ramps and/or roads will be closed.

“Enforcement directives: The surge of police officers will result in enforcement to restore public safety. This includes increased investigation enforcement and charges for all criminal acts related hate, harassment, assaults (including spitting), intimidation, and mischief.

Ottawa’s chief of police also announced that law enforcement officials will even be cracking down on any police officers who provide “support” to the participants of the freedom convoy.

Even some officers are falling out of line, which has left the tyrants in full panic mode.

NEW: Ottawa Police Chief Says He Will Investigate & Prosecute Any Police Officer That Provides Any Support To The #TruckersConvoy2022 Protestors Including Food or Water… pic.twitter.com/A7nffhKBa3

As for the organizers of the Canadian Trucker Convoy, they have remained committed to continuing the protest in a peaceful manner in order to finally bring an end to the tyrannical Covid mandates. In a press conference on Thursday, organizer Tamara Lynch made it clear that public safety is a priority for everyone involved and the protestors are working with the Canadian government to restore their freedom.

“Public safety remains paramount as does our commitment to work with all levels of government and all parts of civil society to bring this demonstration to an end.”