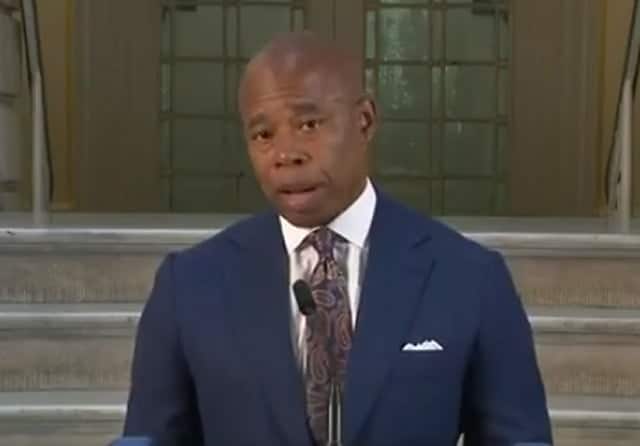 Some New Yorkers are understandably upset that so many resources, and tax dollars, are going to illegals who are not citizens, rather than to New Yorkers in need. New Yorkers, like all Americans, are struggling with out of control housing costs and the steep rise in cost of consumer goods.

According to a study by The New York Times in March of 2022, rents in the city have risen 33% in the last year, close to double the national average.

But in August, it was migrants who were invited by the hundreds to receive free healthcare coverage, food, other supplies and even free phones.

But New York Mayor Eric Adams is working overtime to help illegals, including recent efforts to strike a deal to house illegals in luxury cruise ships.

But what about homeless New Yorkers? The Bowery Mission estimates that there are over  70,000 homeless men, women and children in the New York Metro area.

Yet the Independent Budget Office projected the city will spend almost $600 million a year providing shelter, education, medical care and legal aid to illegals in the city.

Some leaders are speaking out about the city’s prioritization of non-citizens over citizens.

New York will shell out hundreds of millions to migrants who have descended on the city since crossing the US-Mexico border — and Daniel Barber, for one, is disgusted.

Barber, 53, who represents New York City Housing Authority’s 339,000 tenants, said, “The city is going to put forth a ton of money for these people who aren’t even citizens, but they forgot about the people who live in public housing right here.”

Last week, the Independent Budget Office projected the city will spend at least $596 million a year to provide shelter, education, health care and legal aid to more than 17,000 asylum seekers after Texas Governor Greg Abbott began busing them in from Texas this summer.

In fiscal 2021, NYCHA doled out $773,700 to “support various tenant-based initiatives,” according to the city. NYCHA is the largest public housing administration in North America, with $4.2 billion in expenditures this year, the City

Barber said he resents the city for helping asylum seekers find jobs and signing them up for training when thousands of young people in NYCHA need better access to jobs and after-school programs to keep them out of gangs and off the streets.