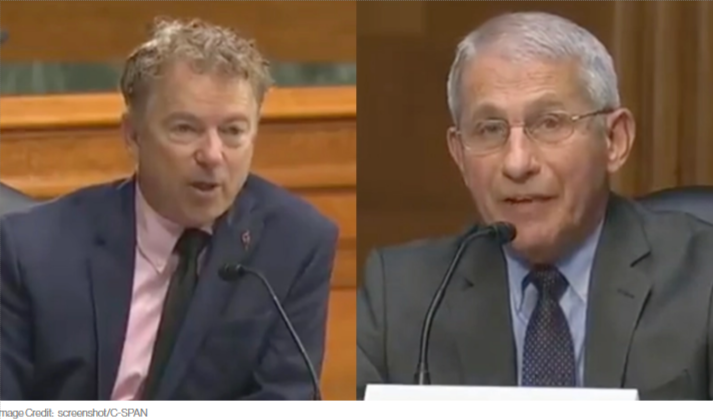 During a hearing with the Senate Committee on Health, Education, Labor and Pensions on Tuesday, Paul asked Fauci if he still supported the NIH’s funding of the Wuhan lab with taxpayer money.

“Dr. Fauci, do you still support the NIH funding of the lab in Wuhan?” Paul asked.

“Senator Paul, with all due respect, you are entirely and completely incorrect. The NIH has not ever and does not now fund gain of function research in the Wuhan Institute of Virology,” Fauci claimed.

In a combative exchange with @RandPaul, Dr. Fauci defends the NIH funding the Wuhan Institute of Virology, insists no taxpayer money went toward creating Covid-19 pic.twitter.com/QQyTPbwh3g

After defining what gain of function research is according to 200 scientists, Paul then asked Fauci if he simply supported the NIH using taxpayer money to fund the Wuhan lab.

“Do you still support sending money to the Wuhan Virology Institute?” Paul asked.

Fauci again insisted that the NIH doesn’t fund the Wuhan lab in any way.

“We do not send money to the Wuhan Virology Institute,” Fauci said.

“We did,” Paul corrected, “Under your tutelage, we were sending it through EcoHealth – it was a subagency and a sub-grant. Do you support that the money from NIH that was going to the Wuhan Institute?”

Fauci finally acknowledged that the NIH sent money to the Wuhan lab, saying, “Let me explain to you why that was done.”

“The SARS-CoV-1 originated in bats in China,” Fauci continued. “It would have been irresponsible of us if we did not investigate the bat viruses and the serology to see who might have been infected.”

Paul then noted that sending any money to the Communist Chinese government was likely a bad idea.

“Or perhaps it would be responsible to send it to the Chinese government – that we may not be able to trust – with this knowledge and with these incredible dangerous viruses,” Paul said. “Government scientists like you who favor gain of function research – “

“I don’t favor gain of function research in China, you are saying things that are not correct!” Fauci exclaimed.

Paul then pointed out that the director of the Wuhan lab, Dr. Xi Zhou, said she couldn’t sleep because she wasn’t certain that COVID-19 came from the lab or not.

“The director of the gain of function research at Wuhan couldn’t sleep because she was terrified that it might be in her lab,” Paul said. “Will you in front of this group categorically say that the COVID-19 could not have occurred through the serial passage in the laboratory?”

“The NIH and NIAID categorically has not funded gain of function research to be conducted in the Wuhan Institute of Virology,” Fauci said.

“We have not funded gain of function research on this virus in the Wuhan Institute of Virology. No matter how many times you say it, it didn’t happen,” he added.

As Infowars reported in April 2020, the NIH did in fact award a $3.7 million grant to the Wuhan Institute of Virology to conduct coronavirus gain of function research.

Additionally, the results of the US-backed gain of function research at Wuhan was published in 2017 under the heading, “Discovery of a rich gene pool of bat SARS-related coronaviruses provides new insights into the origin of SARS coronavirus.”

Fauci has come under increased scrutiny as the NIH’s involvement with the Wuhan lab is being called into question.

Once again, Fauci appears to be lying through his teeth to the Senate committee.