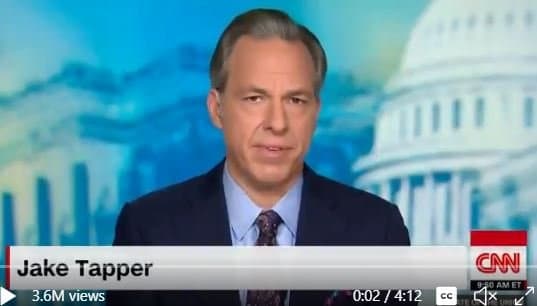 Republicans who objected to the certification of Joe Biden as the winner of the 2020 presidential election showed up with receipts Friday after CNN’s Jake Tapper recently claimed that he refuses to welcome them on his show.

Politico ran a story on Friday in which different members of the mainstream media discussed their willingness to take on “election deniers.” The outlet highlighted the week’s events in the establishment media, and noted that Tapper and Fox News host Chris Wallace have differing views on which congressional Republicans to invite on their respective Sunday programs.

“To book or not to book? — Jake Tapper confirmed what’s been apparent since Jan. 6: Republicans who push election fraud conspiracies are not welcome on his show,” the outlet reported.

“It’s not a policy, but it’s a philosophy where I just don’t want to deal with it,” Tapper recently told New York Times podcast host Kara Swisher. “I mean, there’s about a third of the House Republican caucus that I am willing to book. I could name them to you if you want.”

The statement was something which two Republicans took issue with — and both of those elected officials provided proof that Tapper asked them to appear on CNN’s “State of the Union” talk show.

TRENDING: BREAKING EXCLUSIVE: UN, US, Facebook and Smartmatic Executives Conspired Together Before the 2020 Election and Are Now Trying to Stop or Derail 2020 Election Audits Taking Place

Republican Rep. Elise Stefanik of New York, the current chair of the House Republican Conference, called out Tapper after his comments to Swisher.

On Friday afternoon, Stefanik tagged Tapper in a tweet.

@jaketapper brags about his so-called principled ‘philosophy’ not to book certain Republicans — too bad his producer begged to book us,” she wrote. “#TeamElise keeps the receipts! Happy Friday spiraling @jaketapper @CNN!

.@jaketapper brags about his so-called principled “philosophy” not to book certain Republicans – too bad his producer begged to book us ?#TeamElise keeps the receipts! Happy Friday spiraling @jaketapper @CNN!

What a PHONY! ALMOST as bad as @ChrisCuomo

In a follow-up tweet, Stefanik, who did object to certifying Biden as the Electoral College winner, provided a screenshot of Tapper’s CNN team attempting to book her on his show.

Stefanik showed an email thread dated just last month in which a producer working on behalf of Tapper vowed to get Stefanik on the phone with the host “prior to committing.”

Drink up, @jaketapper! ? You’ll need it with your plummeting ratings!

Stefanik did not appear on “State of the Union” that week, so it appears as though Tapper was not being truthful, and was actually turned down by Stefanik.

But the New York Republican was not the only elected official to publicly call out Tapper over his statement to Swisher.

An employee for GOP Sen. Josh Hawley of Missouri also contradicted Tapper, showing apparent evidence that their boss, like Stefanik, was invited to speak with Tapper. Abigail Marone, Hawley’s press secretary, stated online that Tapper has attempted to get the senator on TV to speak with him — numerous times.

“Ignore @JakeTapper’s public virtue signaling, @CNNSotu has asked @HawleyMO to come on 18 TIMES since Jan 6,” Marone wrote. “We have the receipts.”

We have the receipts. pic.twitter.com/lBvbjpS6Ft

Hawley was one of the many senators to object to the Jan. 6 vote certification.

Pro-Life Flight Attendant Gets Huge Win In Court, Judge Orders Her Be Re-Hired