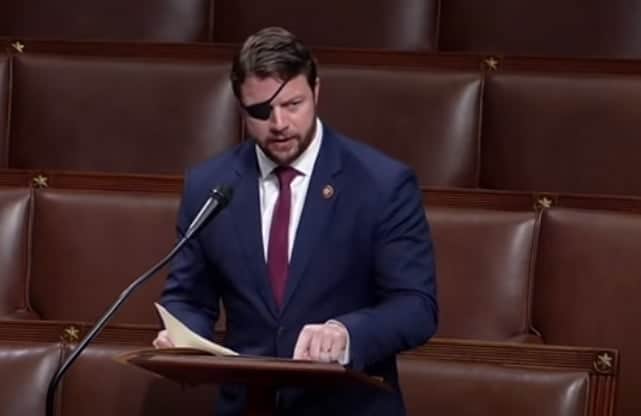 RINO Rep. Dan Crenshaw blasted Republicans who question the results of the 2020 election on a recent episode of his podcast.

The neoconservative congressman was speaking to election reform advocate Nick Troiano on his Hold These Truths with Dan Crenshaw podcast when he made the comments.

“There’s a real dysfunction that exists within the election system today,” Troiano said. “It’s not only producing a dysfunction, the policy making process, it’s a real threat to democracy. And I think, it’d be interesting hearing your experience with this, which is the kinds of more extreme candidates that are running are willing to overturn free and fair elections. Now, a majority of Republican nominees for the US House this cycle, right, aren’t accepting the results of the 2020 election.”

“What does that mean when the next, you know, crop of Congress comes in next year and we’re faced with similar situations of close election results in the future. I mean, this is a, you know, real threat to our ability to keep the republic,” Troiano continued.

TRENDING: Jan 6 Protester and Green Beret Jeremy Brown Who Was Arrested for Turning Down FBI Request to Work as Operative on Jan 6 Is Offered a Plea Deal by Corrupt DOJ — Turns It Down

“I have two ways of thinking about that particular issue. It’s more of a threat of people just willing to say anything to get attention,” Crenshaw said. “I mean the good news is none of these people will ever have any power to overturn elections, right? This was — it was always a lie. It was always a lie. The whole thing was always a lie. And it was a lie meant to rile people up.”

“I’ve talked about this a nausea, it really made me angry. Cause I’m like, the promises you’re making that you’re gonna challenge the electoral college and overturn the election, there’s not even a process for you to do that,” he continued. “It doesn’t even exist. So I was like, ‘What the hell are we doing?’ And I would tell that to people kinda behind closed doors too.”

Crenshaw blasted “rabble-rouser” “political personalities” for riling people up about being able to overturn the results.

“Especially a lot of the rabble-rousers, like the political personalities, not even the politicians. We definitely had the arguments behind closed doors in the Republican party before that,” Crenshaw added.

“But even just the others, they’re like, ‘Yeah, we know that, but we just, you know, people just need their last hurrah. Like, they just need to feel like we fought one last time. Trust me, it’ll be fine.’ And I was like, ‘No, it won’t,’” he continued. “‘That’s not what people believe and that’s not what you’re telling them. And maybe you’re smart enough to know that but like–‘ So we have a lot of people in the political world that are just willing to say things they know aren’t true, they know aren’t true. It’s a huge manipulation.”

Crenshaw said that candidates questioning the results “to grab people’s attention” is a “threat.”

“I actually don’t think it’s the biggest threat to democracy as you do, simply because it can’t be done. But on the other hand, I think the bigger — the more generic threat is this extreme willingness to say the most extreme things just to grab people’s attention and then people’s willingness to believe some of it,” he concluded.