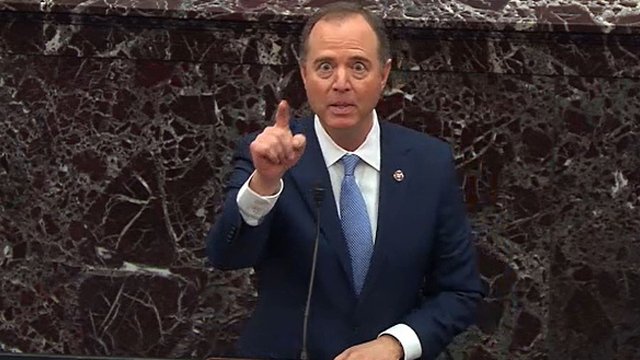 You just knew Schiff was going to jump into the fray.

TRENDING: SPERRY: FBI Agents Involved in Trump Raid are Under Criminal Investigation by Durham For Abusing Their Power in Trump-Russia Probe

The two lawmakers, whose panels have jurisdiction over national security and other oversight matters, specifically asked for the DNI’s office to initiate a damage assessment, which would evaluate any harm to national security related to Trump’s handling of the documents. It comes just a day after an unsealed search warrant revealed the FBI was investigating former President Donald Trump for obstruction of justice and potential violation of the Espionage Act.

The outreach from the two lawmakers marks the first major oversight step by House committees in the wake of the FBI’s search of Mar-a-Lago.

More than 3 dozen FBI agents descended on Trump’s Florida residence on Monday and searched the compound for several hours.

The FBI would not allow Trump’s lawyers to be anywhere near the areas that were rummaged through.

“Everyone was asked to leave the premises, they wanted to be left alone, without any witnesses to see what they were doing, taking or, hopefully not, “planting.” Why did they STRONGLY insist on having nobody watching them, everybody out?” Trump wrote on Truth Social on Wednesday.

IT WAS ALL DECLASSIFIED.

That’s all that matters.

A US President has the power to declassify documents.

The FBI and goons at the National Archives are not above a US President.

President Trump on Friday described the declassification process in a statement to John Solomon of Just The News.

“He had a standing order that documents removed from the Oval Office and taken into the residence were deemed to be declassified,” Trump’s office said in a statement to Just The News. “The power to classify and declassify documents rests solely with the President of the United States. The idea that some paper-pushing bureaucrat, with classification authority delegated BY THE PRESIDENT, needs to approve of declassification is absurd.”