Steve Bannon and The War Room: Gateway Pundit Has a “Blockbuster Scoop” (VIDEO) 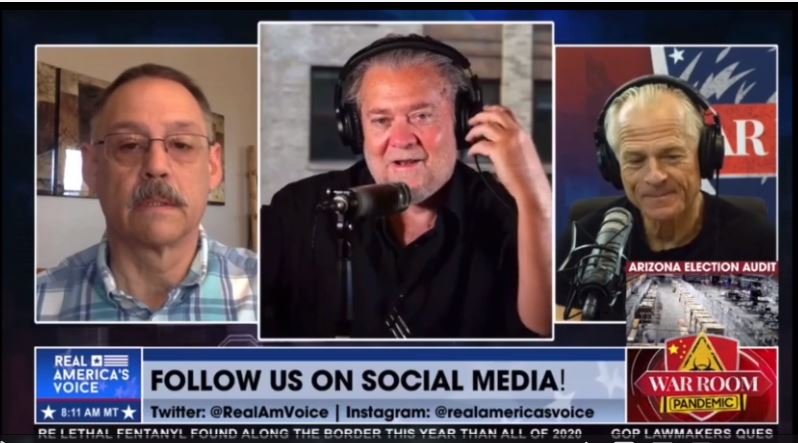 As Jordan Conradson at The Gateway Pundit reported last night–
The Arizona Audit officially completed both the hand count and paper evaluation inspections on Friday.
The audit workers will now vacate Veterans Memorial Coliseum and prepare to deliver a report to the Arizona Senate.

On Monday or soon after, we will know the true number of ballots that were cast in Maricopa County. If it is drastically different than the number of certified ballots, as expected with the discrepancies found, there will be severe consequences for Doug Ducey and Katie Hobbs.

Saturday morning on The War Room, Steve Bannon opened his panel pumping this “blockbuster scoop” at The Gateway Pundit.

Steve Bannon:  The Gateway Pundit has the story, they have a blockbuster scoop from the inside.  They say as early as Monday we could be getting a report.  At least, on the first phase of this.  So, I want to tell everybody that the way that we have this structured is the Arizona full forensic audit is tripartite.   It’s a full forensic audit of the ballots.  It’s also a recanvas and it’s also analysis of the machines.  I think what people are talking about is, I want to get some observations from Mark Finchum, the first part of this is the ballot part.

Rep. Mark Finchem: Yeah, Steve I think you got the best way to couch it. You got the best evidence that is paper. And quite frankly Dr. Navarro is exactly right the piece that goes with that is the canvas. But just park that idea for a moment. Then you got the electronic review, the image review. And then you got the software and the equipment review.

Get the rest here.

UPDATE- Next week ought to be lit. We wish we could say more.