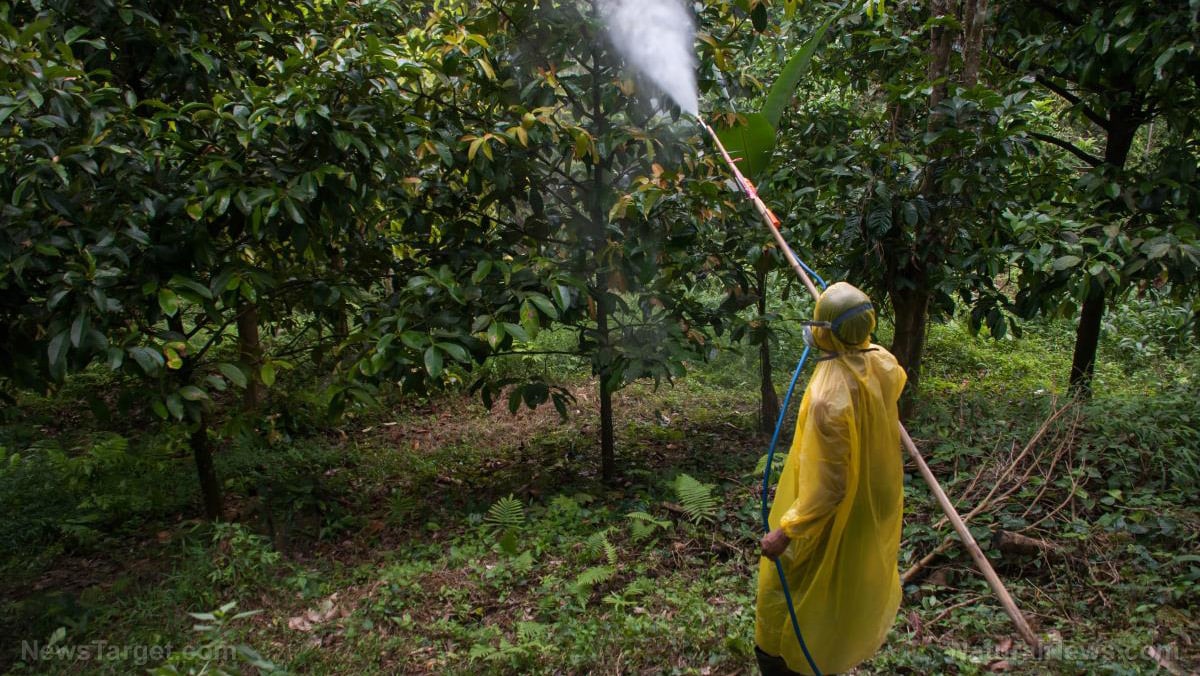 (Natural News)
Many studies have shown that pesticides are linked to various health issues, yet farmers worldwide continue to use them on different crops.

According to a study published in the International Journal of Hygiene and Environmental Health, babies exposed to pesticides often used on apple and citrus trees are at least 87 percent more likely to develop retinoblastoma, a rare type of eye cancer.

For the study, researchers at the University of California, Los Angeles compared the usage levels of almost five dozen farmyard chemicals near the homes of 335 children under five years old who developed retinoblastomas to healthy children from the same state.

Findings showed that children exposed to four specific chemicals were more likely to have the cancer, which can permanently affect children’s vision and can cause problems reading and writing. Retinoblastoma may also cause blindness.

Acephate, one of the four chemicals, is already banned in Europe. The other chemicals were bromacil, which shouldn’t be used near homes, kresoxim-methyl and pymetrozine.

The researchers who conducted the study warned that pesticides are specifically dangerous for children because their organs are still developing. These chemicals can disrupt DNA or inflame cells, causing retinoblastoma.

The research team encouraged farmers to be more aware of what chemicals they were spraying on their fields. They also urged the Environmental Protection Administration (EPA) to impose stricter regulations on pesticide use. (Related: Court orders EPA to reassess glyphosate’s impact on human health and the environment.)

Retinoblastoma is a type of eye cancer that can affect either one or both eyes. According to the American Cancer Association (ACS), the disease starts when cells begin to grow out of control due to a genetic mutation.

Your eyes start to develop before birth. During the early stages of development, the eyes have retinoblasts, which are cells that multiply to make new cells that fill the retina.

At a certain point, these cells stop multiplying and turn into mature retinal cells. This process often goes on without a hitch, but something goes wrong with this process in some people.

Instead of maturing, some retinoblasts continue to grow out of control, forming a cancer known as retinoblastoma.

The chain of events inside cells that causes retinoblastoma is complex, but it usually starts with a change or mutation in the RB1 gene. The normal RB1 gene helps keep cells from growing out of control, but a change in the gene makes it stop working properly.

Retinoblastoma is more common in children under three years old.

Symptoms of retinoblastoma include a white or pink pupil, lazy eye or early signs of vision problems. If you have retinoblastoma, a doctor may recommend radiation therapy or laser therapy to kill cancer cells, along with chemotherapy in certain cases.

Retinoblastoma can leave children with lifelong vision problems and blindness. This type of eye cancer also increases their risk of suffering a second cancer later in life.

Since 1990, California has required that all pesticide uses in agriculture are reported centrally.

For the study, researchers analyzed data from California’s cancer registry. They extracted all cases of retinoblastomas in children under five diagnosed from 1998, about a decade after the registry began, until 2013.

Next, the research team collected the addresses of these cases and those of 120,000 healthy children born in the state over the same period. The latter was collected randomly. The researchers then collected Pesticide Use Reports on which pesticides were used around the children’s homes in the months before they were born.

Findings revealed that children with the cancers were more likely to have been exposed to four specific pesticides compared to healthy children:

The researchers did not look at what concentrations of the pesticides had a higher association with cancer and there was no link suggested for the other 54 pesticide chemicals included in the study.

Dr. Shiraya Thompson, the study’s lead author and a public health researcher, said farmers should be more conscious of the potential health risks of the pesticides they use.

Thompson also urged the EPA to consider limiting the use of harmful chemicals to reduce cancer risk.

“You might have very little control over what’s going on in the cornfields near you,” said Thompson. She added that it can also be difficult to know which pesticides farmers are using.

Because the study was observational, it could not determine whether the chemicals had caused the cancer or if it was due to another factor. However, scientists have been warning for years that pesticide exposure raises the risk of cancers in some people.

While researchers still have to figure out what exactly causes retinoblastomas, the ACS said exposure to chemicals and radiation may raise the risk of developing eye cancer. The data also suggest that pregnant mothers could have been exposed to the chemicals either from run-off from the farmyards or through work.

For more on things that can cause cancer, visit CancerCriminals.com.

Watch the video below to find out which 10 fruits and vegetables contain the most pesticides.