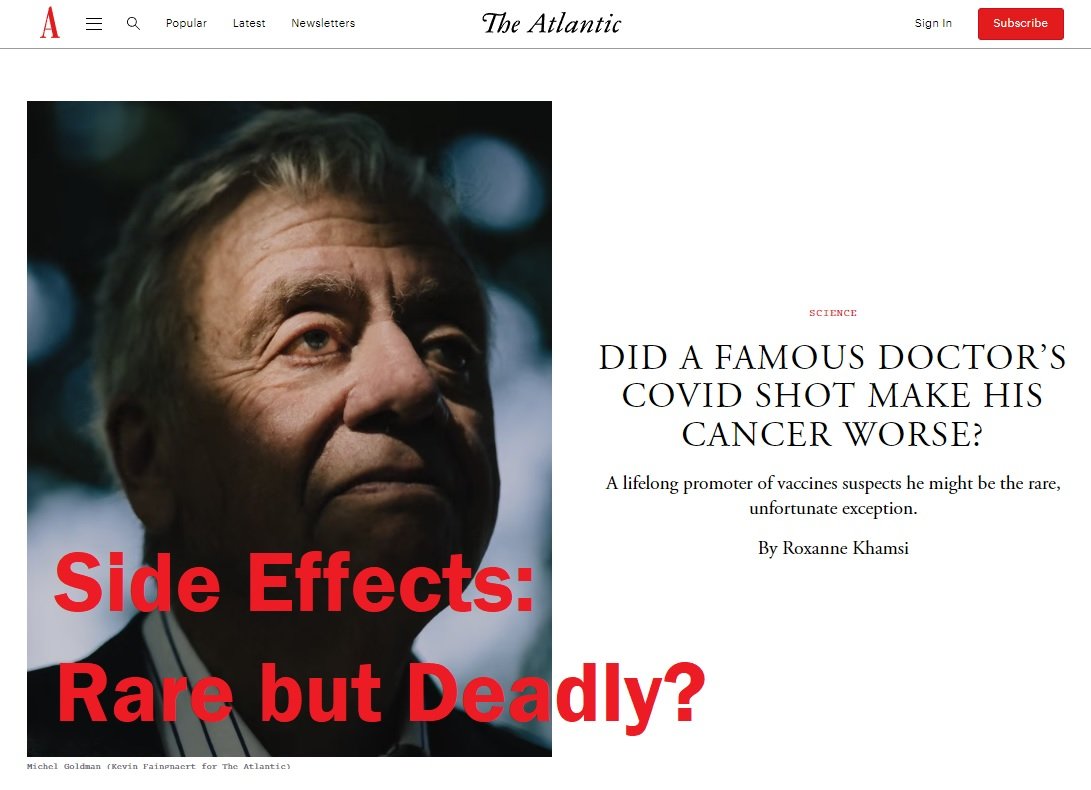 There is a stunning report this week in the irredeemably partisan and highly influential magazine, The Atlantic, this week.

The title of the article is “Did a famous Doctor’s COVID shot make his cancer worse?”

The report in The Atlantic published today is not shocking in its content, Gateway Pundit readers have known for over a year now about the dangers of the experimental COVID “vaccines.” We have reported on the deaths, hospitalizations, and dangerous side effects since early 2021.

What is shocking is that The Atlantic is FINALLY publishing factual reports on the dangers of the Fauci endorsed vaccines.

This is a turning point on the left. They must know things are about to get really, really bad.

Dr. Michael Golden, a top immunologist in Belgium, noticed his cancer spread significantly after he received a booster shot last year. This is a very disturbing article.

Kudos to The Atlantic for not hiding this report from its readers.

Roxanne Khamsi at The Atlantic reported:

On september 22 of last year, Michel Goldman, a Belgian immunologist and one of Europe’s best-known champions of medical research, walked into a clinic near his house, rolled up his sleeve, and had a booster shot delivered to his arm. He knew he’d need it more than most.

Just a few weeks earlier, Michel, 67, had been to see his younger brother, Serge, the head of nuclear medicine at the hospital of the Université Libre de Bruxelles, where both men are professors. Michel was having night sweats, and he could feel swollen lymph nodes in his neck, so his brother brought him in for a full-body CT scan. When the images came through to Serge’s computer they revealed a smattering of inky spots, bunched near Michel’s left armpit and running up along his neck. It was cancer of the immune system—lymphoma.

Given his own area of expertise, Michel understood this meant he’d soon be immunocompromised by chemotherapy. With another winter on the way—and perhaps another wave of SARS-CoV-2 infections—that meant he had just a narrow window of opportunity in which his body would respond in full to COVID vaccination. Having received two doses of Pfizer the prior spring, Michel quickly went to get his third. If he was about to spend months absorbing poison as he tried to beat a deadly cancer, at least he’d have the most protection possible from the pandemic.

Within a few days, though, Michel was somehow feeling even worse. His night sweats got much more intense, and he found himself—quite out of character—taking afternoon naps. Most worryingly, his lymph nodes were even more swollen than before. He conferred with Serge again, and they set up another body scan for September 30, six days before Michel was scheduled to start his cancer treatment. Once again he sat in the radiology waiting room while his brother waited for the pictures to appear on his computer.

Serge’s bushy eyebrows furrowed when he spoke with Michel after having seen the scans. (“I will always remember his face, it was just incredible,” Michel told me.) The pictures showed a brand-new barrage of cancer lesions—so many spots that it looked like someone had set off fireworks inside Michel’s body. More than that, the lesions were now prominent on both sides of the body, with new clusters blooming in Michel’s right armpit in particular, and along the right side of his neck.

When Michel’s hematologist saw the scan, she told him to report directly to the nearest hospital pharmacy. He’d have to start on steroid pills right away, she told him. Such a swift progression for lymphoma in just three weeks was highly unusual…